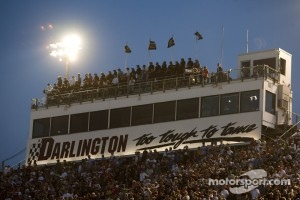 The foundations of the modern sport, however, were poured the following year with the opening of Darlington Raceway in South Carolina. The track’s 63rd running of the Bojangles’ Southern 500 is set for Saturday night (FOX, 7 p.m. ET).

Before Harold Brasington’s then-1.25-mile track was built – a year-long process – asphalt race tracks were virtually unheard of in the southeastern United States. The Strictly Stock Series competed on paved ovals only twice pre-Darlington, at the 1/2-mile Dayton Speedway in Ohio although Daytona’s Beach & Road Course surface was a combination of pavement and sand.

Darlington, however, was the game-changer leading to construction of paved, banked superspeedways (tracks measuring a mile or longer) over the next decade in Daytona Beach, Fla., Charlotte and Atlanta.

More than 80 cars from all points of the compass turned out for the Sept. 4, 1950 Southern 500, driven rather than towed in many cases from small Carolina towns a few miles from the track and more than 2,500 miles distant. Qualifying for the 75-car field took two weeks as Brasington mimicked events leading up to the Indianapolis 500.

Johnny Mantz, a 31-year-old from Long Beach, Calif., drove a six-cylinder Plymouth to a nine-lap victory over Fireball Roberts in a race that took more than six and a half hours to complete. Much of the race was run on the track’s flat apron because the banking was rough and abrasive and quickly wore tires down to the cords.

Mantz’s Plymouth, jointly owned by Hubert Westmoreland and Bill France Sr., was the only car in the field equipped with special Firestone racing tires that lasted all day. While his competitors were in the pits for tire changes, Mantz only had to stop periodically for fuel – leading to his enormous margin of victory. He averaged 75.25 mph – not much slower than Curtis Turner’s 82.034 mph pole speed.

Many of those competing in the first Southern 500 are deceased including top four finishers Mantz, Roberts, the season’s champion to be Bill Rexford and 1949 champion Red Byron.

Still living are Cotton Owens, now 87 and a NASCAR Hall of Fame nominee, who finished seventh in a Plymouth. Hershel McGriff, racing the same Oldsmobile 88 with which he’d won the year’s inaugural Carrera Pan America – Mexican Road Race – was eighth. McGriff competed in several NASCAR K&N Pro Series events in 2011 at the age of 84.

America was a far different place five years after the end of World War II. There was little infrastructure, especially in the south, no Interstate highways and not much in the way of hotels in such rural areas as Darlington, S.C.

Gasoline cost 18 cents a gallon, a new car, which could be raced in the Southern 500 without modification, went for $1,510 and the average annual salary was $3,210. The price of a black and white television set was $249.95 but it was unlikely you’d find auto racing programming on the few available channels.

Owens, whose crew was comprised with relatives and friends, had begun racing close to home with a Chrysler dragged from a wrecking yard. His friends included NASCAR Hall of Famer Walter “Bud” Moore. He “commuted” to the track each day – a three-hour drive – from his home in Union, S.C.

McGriff met France and Turner at the Mexican race. “Bill invited me to come to Darlington,” said McGriff, who raced in California, Oregon and Washington. “Otherwise I wouldn’t have known about it.”

McGriff drove his Oldsmobile cross country from Portland, Ore., a distance of more than 2,600 miles sharing driving duties with his owner/mechanic Ray Sundstrom. “I slept two or three nights on the county courthouse lawn and went into the bathroom to clean up,” said McGriff, then 22 years of age.

The race itself was spectacular – if only because so many cars were confined to a relatively small space. McGriff remembers the field being lined up and stretching all the way around to turns 3 and 4. “I can’t imagine how they scored them,” he said. “You could go 10 deep the track was so wide. We ran on the flat (apron). You could run on the top part (banking) and go faster but you wouldn’t run far.”

The race was an endurance contest as much in the pits as on the track.

McGriff had found three or four volunteers at a local gas station to service his car. Changing a tire required a heavy floor jack and a lug wrench – air guns and lightweight jacks came to stock car racing much later. Gas was dumped into the car through a funnel.

Mantz, meanwhile, kept up a consistent pace content to let the faster, eight-cylinder cars wear out their tires. McGriff changed 14 – at $15 a tire. “Then we’d go by him like he was standing still,” said McGriff, who completed 374 of the 400 laps and was paid $500.

And afterwards? “I got back in the car and drove home,” said McGriff. “I didn’t get any dents. There was so much room that if a guy wrecked in front of you, you could stop.” Today’s Darlington racing, where speeds exceed 180 mph, obviously is not your grandfather’s Southern 500.

Owens went on to win nine times as a driver and 38 races as an owner. NASCAR Hall of Famer David Pearson drove Owens’ No. 6 Dodge to the 1966 NASCAR Sprint Cup championship. “His hobby was his love; he got to do it as a living and we did it as a family,” said Debbie Davis, Owens’ daughter.

McGriff, named one of NASCAR’s 50 Greatest Drivers in 1998, won four times and finished sixth in 1954 standings. Offered one of Carl Kiekhaefer’s potent Chrysler 300s for the 1955 season, McGriff instead chose to stay in Oregon to run the family’s lumber business.

Race Retro turns back the clock

The DTM pivoted away from its touring car heritage by moving to GT3 cars in 2021, but it’s still indulging its history with familiar machines appearing on the support bill. A move to expand the offering for fans, the new-for-2022 DTM Classic Cup is already proving a worthwhile addition to its platform and attracting some of its past names to do battle once more.