DAYTONA BEACH, Fla., (Jan. 23, 2002) * Dave Marcis made his first career Winston Cup start at Daytona International Speedway back in 1968. He drove his trailer through the tunnel and entered his No. 30 Chevrolet in his first Daytona 500. "I didn't ...

DAYTONA BEACH, Fla., (Jan. 23, 2002) * Dave Marcis made his first career Winston Cup start at Daytona International Speedway back in 1968. He drove his trailer through the tunnel and entered his No. 30 Chevrolet in his first Daytona 500. 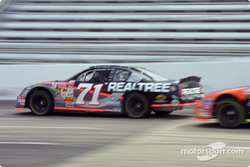 Marcis started 35th and finished 20th in his first Daytona 500. His first 500 start is part of a record 32 consecutive starts from 1968-99. In Speedweeks 2002, Marcis will once again drive through the tunnels at Daytona, but it'll be the last time as a competitor in the Winston Cup Series.

If Marcis qualifies for the 44th annual Daytona 500 on Feb. 17, the 60-year-old driver will make his final Winston Cup career start. If he makes the field, he will also pull ahead of Richard Petty's record for most Daytona 500 starts. Marcis is currently tied with Petty at 32 starts.

But to make the race, Marcis will have to make the field either through Daytona 500 time trials on Feb. 9 or in one of the Gatorade 125-mile qualifiers on Feb. 14. He understands it'll be no easy task.

"Making the race, that's the deal, trying to get in the Daytona 500," said Marcis, who drives and owns the No. 71 Realtree Camouflage Chevrolet. "That would be very important. I started my Winston Cup career at Daytona and would certainly love to end it with the Daytona 500 in 2002."

Marcis' only victory at the "World Center of Racing" came in a Gatorade 125 back in 1976. But that win didn't come easy as a problem in the pits almost ruined the day.

The gearshift broke off Marcis' Dodge, but quick thinking from crew member R.K. Smith saved the day. Smith grabbed a wrench, jumped over the wall and handed it to Marcis, who was able to get the car into third gear and rolling.

"That was a great day," said Marcis, who held off Buddy Baker and David Pearson for the victory. "It was a pretty exciting race. It meant a lot to me to win that race."

The last time Marcis had a really good shot at victory at Daytona was in the 1987 Pepsi 400. Marcis ran up front all day long and was leading when a late-race caution enabled Bobby Allison to take four fresh tires and blow past the field.

"It's tough to pit when you're leading," Marcis said. "It's an opportunity that people behind the leader have and that the leader doesn't have. There were only like three laps left. Do you pit or don't you? A couple of guys * Bobby Allison and Buddy Baker * choose to pit. Bobby ended up winning the race and Buddy got second and I came in third. They had new tires on.

"It was a tough one to lose. It looked like we were able to win that race. It was quite a challenge for a small independent team to be able to do that. We had everybody blown away that day."

Now, Marcis' small independent team will look to pull off another challenge * making the 44th annual Daytona 500 and capping off Marcis' career in grand style.

Tickets for the 44th Daytona 500 can be purchased online at www.daytonainternationalspeedway.com or by calling the Speedway ticket office at (386) 253-7223.