According to Allan Brown's "History of America's Speedways," there have been a total of 5953 oval speedways in the United States, with 1040 of them still active. After this weekend, that total will be 1039. Or maybe 1038, depending on how you ...

According to Allan Brown's "History of America's Speedways," there have been a total of 5953 oval speedways in the United States, with 1040 of them still active. After this weekend, that total will be 1039. Or maybe 1038, depending on how you count your tracks.

You're probably seeing a lot of stories about Manzanita these days, with its final race scheduled for April 11 (postponed to April 12*). The facts are all out there: converted from a dog track to a car track in 1951, expanded to a half mile in 1954, the inner third mile added in the 80s. Years of ownership, growth and promotion by Keith Hall. A roster of racers that makes any Hall of Fame jealous. The final World of Outlaws race was March 28. Chad Kemenah won it, and scooped up some dirt to take home. The Outlaws have fond memories of the place. WoO King Steve Kinser first ran there in 1977, and went on to seven wins, with and without wings. Sammy Swindell first ran there in the early 70s, and has 18 wins over the decades. 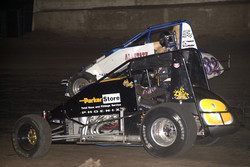 But there is a lot more to a track where the Outlaws have run than the Outlaws. I think more of the wingless sprint cars that regularly ran there, and of all of the other classes from modifieds through midgets through dwarfs. The final event is scheduled to be a three-night affair with a typical Manzanita mix of at least half a dozen different cars. With that mix, my head has been filling with a random collection of reminiscences of my visits to Manzy. I'd like to share them.

I knew about Manzanita before I ever saw it. I live on the east coast, but through the 70s and 80s I traveled to California a lot and my home track was Ascot. I remember special nights when the Arizona cars towed west to join the CRA regulars. In the 80s my travels started bringing me to Phoenix every now and then, and I just had to see where those guys came from. I've managed to get there a number of times. Details fade with time, but the memories are strong.

My first visit to Manzanita was in 1986 or 1987. There was a CRA show, the flip side of Arizona cars towing to California. Winner of the feature race was Lealand McSpadden. Quite a thrill, going to a track for the first time and seeing the Tempe Tornado himself win. Kind of like my one visit to Nashville Speedway in the 70s and seeing Charlie Glotzbach win a big LMS race, but even better because this was on dirt. I remember McSpadden's victory interview. It was as gracious a speech as I'd ever heard. The customary thanking of the car owner was a tale of how he made a last minute decision to enter this race, and how the owners pulled out all the stops to prepare the car in time.

Manzy was the first place I saw winged sprint cars. In those days I liked to sit toward Turn 1. I was accustomed to the feel of regular sprint cars and modifieds entering a turn. I had my share of watching pavement modifieds on fast half miles. But nothing had prepared me for winged sprinters. Nothing can - you've just got to see it. The race that evening - late 80s or early 90s - was won by Australia's Mad Max Dumesny. Afterwards I went into the pits. I just had to see this madman who hurtled the Gil's Well Drilling Special around the dirt at those fantastic speeds.

I was expecting someone like Mel Gibson, but much tougher. I was startled to meet a youngster who looked like he just stepped out of a Cub Scout pack. Very pleasant, quiet voiced, no fire bellowing from his nostrils, and happily signing autographs for his fans. I bought the last T-shirt he had for sale that evening, and he insisted on cutting the price in half because there was a small stain on it.

I first saw the inner track in action for midgets during a Sprint-Midget double header. A more memorable time was a Thursday or Friday night show with half a dozen classes of cars, including Dwarf cars. I spent a lot of time in the 60s watching modifieds on half mile ovals, and those Dwarf cars on the third (or was it quarter?) mile brought me back to those times. The sound was different, but the racing was every bit as good. As were the racers. An early leader in the Dwarf feature tangled with a lapped car, and I thought he broke his suspension. At least the right front wheel seemed to point randomly in odd directions. But he held on and eventually finished a solid second. Later on in the pits I found the car and driver. Yes, the right tie rod was broken. He was a former motorcycle racer who had just moved to cars, and figured out on the fly that three wheels was a reasonable enough transition.

I've seen Legends cars at other tracks, and they look kind of like Dwarf cars, but they're just not the same.

Every fall Manzanita hosted the Western World Championships. I was fortunate to have business in Phoenix in the fall of 2002, and I stretched my visit to cover all three nights. Three kinds of cars: SCRA non-wing 410 sprinters, Arizona 360 sprinters, and mini-sprints. On Friday night all three were in action, and the pre-race mud-packing by well over 100 sprint cars and mini-sprints rolling around both tracks blew me away almost as much as Mad Max's winged sprinter years before.

Bud Kaeding won the Western World on the big track that year, with Jeremy Sherman taking the 360 feature on the one-third mile, and Terry Palmer capturing the mini sprint event. As usual the racing was excellent all three nights. But even more memorable was sitting in the same spot three nights in a row and hanging out with the fans around me. I like to take notes at races, which at first got some odd stares. But as the three nights progressed, people started checking with me on the lineups and heat results. I soon learned that they were more than fans checking on a favorite - I was sitting amongst family members of some of the local drivers. By the time the final night ended, I felt like I was a regular who went every week.

From 2001 through 2005 several friends and I traveled to Phoenix in the spring to attend the Indy car race. A big draw was that the Indy weekend coincided with the Gary Sokola Classic - two nights of non-wing SCRA sprint car action. As much as the winged sprints impressed me, there is nothing like watching non-wing sprint cars sliding through the turns. By then I learned that the best place to sit was at the Turn 4 end of the front stretch, where I could look across the turn and see those beautiful slides. And the rooster tails of dirt sprayed over the Turn 4 wall, and not into our beer.

In those five visits to the Gary Sokola classic, my friends and I saw Tony Jones, Jeremy "Sherminator" Sherman, Cory Kruseman and Mike Kirby take the Classic, Sherman taking it twice.

Not all of the drivers had nicknames, but the ones who did had great ones. Besides Sherminator, there were Gas man, Ripper, and Demon. I go to the central Pennsylvania sprint tracks these days. There are nicknames like Fast Freddy, The Edge, and Cricket. Just not the same.

I'm not sure if "ambiance" is the right word to use in describing a dirt track, but Manzanita had it. Its location at 35th and Broadway was just what you wanted. East of the cattle feed lots. Next to a river that was usually dry and dusty. Junkyard behind the third turn wall. If the main parking lot was full, we learned to not try to park out on the street, but to pay $5 to the nice couple working the big vacant lot next to the liquor store. I understand that the track is being sold for development, and really wonder what will be developed there.

Once you entered through the adobe arches and the flanking palm trees, the track and concession areas were perfect. It had some of the best food I've found at short tracks. BBQ ribs, green chili burritos. A great sub stand outside Turn 4 that I'd hit if the line at the rib place was too long. A beer stand. Once settled into the wooden grandstands, the place felt right. One of my Manzy-going buddies described it as hallowed ground, and I'm sure he was right. You could look out across the track and sense Foyt, Boat, Thompson, Kenyon, Wilkerson, Bettenhausen, et al., making their marks in the dirt.

Perhaps the best part of Manzanita was its legendary track announcer Windy McDonald. He worked the PA off and on for half a century, and I was fortunate that he was on the mike for all of my visits. He kept the sound cranked up so he could be heard above the sound of the cars, and was one of the few announcers who you would want to hear. Great play-by-play during the races, and he always had good tales to fill the breaks.

Windy was the key player in the ceremonies leading up to the start of the feature race. The cars would line up, either in their two rows or parked diagonally along the edge of the front stretch. Each driver was then introduced by Windy in full - and I mean full - voice. I suspect that folks in downtown Phoenix learned the names of all the drivers.

Once the cars were rolling, Windy told the crowd about his special rule. As spectators, we were expected to make as much noise as possible for the start. Scream, stomp the stands, slug the guy next to you, as long as we made noise. I worried about the wisdom of stomping those wooden stands, but I was more fearful about not obeying that big booming voice from above.

One on one, of course, Windy spoke in a normal voice and was thoroughly charming. I had the pleasure of chatting with him on my last trip to Manzanita in 2005. He had just finished the first volume of "Thunder in the Desert," his history of racing in Arizona. The book is great, his autograph is great, but best of all was meeting the man who saw all of it.