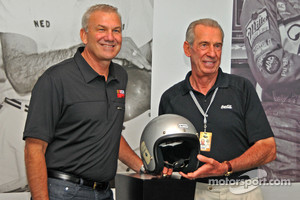 Dale Jarrett likes to joke that he and Jeff Gordon both started their racing careers in 1976. The only difference is Gordon was five years old at the time and Jarrett was 20.

But when you grow up in a family where your father wins two championships and 50 races in NASCAR’s top series, it was only a matter of time before the racing bug hit Jarrett and, once it did, there was no stopping him.

After bouncing around the NASCAR Sprint Cup Series with a number of different teams and owners in the late eighties, Jarrett started the 1990 season without a ride. Enter the famed Wood Brothers.

“It was like a dream come true, but it was actually the break that really started my career. Even though I had been in the Cup Series a few years before that, this was really the opportunity that I needed with an established team – people that had been around a lot,” said Jarrett. “You can always look back and say, ‘What if this wouldn’t have happened? Why did this happen?’ It was an accident that Neil Bonnett was in at Darlington that even gave me the opportunity to get into that car, so to get the opportunity to be in such a famous car with that number and that family was the dream of a lifetime come true for me.”

Jarrett took advantage as he posted seven top-10 finishes in 24 races, including a season-best fourth-place effort in the final race at Atlanta Motor Speedway. As a result, expectations started to grow and after a sixth-place run in the season-opening Daytona 500 a couple months later, Jarrett was starting to make people take notice of his skills.

The 1991 season was one of steady progress and as the team headed to Michigan for the Champion Spark Plug 400 in August, it was in the midst of a streak that had seen three straight top-10 finishes. The mood around the 21 car that weekend was optimistic to say the least, not just because of how well things were going, but because of some new technology that was under the hood.

“It was the first time that we actually had the new cylinder heads from Ford Motor Company that Robert Yates had designed,” recalled Jarrett. “They were kind of trickling down. Robert had kept them for himself for a long time and then it became a Ford part and we were able to get them.”

Jarrett started 11th while fellow Ford driver Alan Kulwicki led the field to the green flag from the pole, but it was a trio of Fords who started second, third and fourth that took turns leading the majority of laps. Mark Martin, who started on the outside pole, led 13 laps while Bill Elliott, who qualified fourth, led 48 circuits. The man who asserted himself as the driver with the dominant car that day, however, was Davey Allison, who led 61 laps for Robert Yates Racing.

While Michigan has historically been known as a horsepower track, many of its races have been decided by fuel mileage and pit strategy. On this occasion, it was the latter.

“We probably had our best set of tires on at that time and our car was the best. We had pretty much been a top-five car all day, but at this particular time we were a little bit better than that,” said Jarrett. “Davey Allison was kind of the class of the field as he normally was there, so Eddie (Wood) made a call to just get gas. That got us out front.”

Jarrett inherited the lead with 11 laps to go and mentally prepared himself for the final dash to the finish.

“I didn’t have the greatest restart, but Davey was a few cars behind and I knew I had a little bit of a cushion,” remembered Jarrett. “The last couple of laps were almost a blur at the time, but as I’ve watched it over and over through the years I see things, and even to this day it brings back memories of exactly what that was like.”

Allison closed to Jarrett’s rear bumper with seven laps to go and stayed there until two laps remained. As the two drivers went through turn three, Allison moved to the outside and pulled up alongside Jarrett and by the time they took the white flag, Allison had the slightest of leads.

“I remember my heart racing and having this opportunity, not knowing if I could hold Davey off because he had fresher tires,” said Jarrett. “That organization was on top of the world right then, so could we beat them? I had never won one of these races, but I was giving it everything that I had and it was just a great battle with Davey.”

Jarrett held his preferred bottom line and pulled back in front by a bumper, but as he came off turn two he got loose and wiggled slightly, which allowed Allison to pull even as they thundered down the backstretch. Jarrett had a slight edge through three, but that changed as they came off four and Allison nudged in front.

The two cars made door-to-door contact coming to the finish line with Jarrett ending up inches ahead as they crossed under the flag stand.

“To win my first race for the Wood Brothers in that type of situation and literally winning it by eight or 10 inches, I don’t know that it gets any better than that. Once again, not only getting the ride for the Wood Brothers, but having the opportunity to take them back to victory lane and get my first win was just the thrill of a lifetime,” said Jarrett.

And while it was a thrill for Dale, it was an even bigger thrill for his father, Ned, who was calling the race in the television broadcast booth.

“For him to beat Davey Allison on that day and on that last lap they banged together and came across the start-finish, it was hard to determine who the winner was,” said Ned Jarrett. “Naturally, I was in the television booth looking straight down on the start-finish line and, in my mind, he won it. That was a very special feeling to see him win on a superspeedway and get his first victory that way.”

All that remained to cap off the day was a trip to victory lane, but when you’ve never been there before in NASCAR’s top series, it can be somewhat overwhelming.

“I really didn’t know that much of what to do. I had won some Busch races at the time, so I had that idea, but this was a whole different scenario. There is so much more going on and so many questions to answer then because it had taken me a little while to get that first victory,” said Jarrett. “But then you had people like Davey coming over to victory lane to congratulate me, and other drivers. That meant the world to me because they appreciated and understood the hard work and effort it had taken to get there.

“Then all of the photos started. When we did a Busch Series win, it didn’t take nearly that long, but it took quite a while,” continued Jarrett. “That was fine with me. I would have been there for days if that’s what it would have taken because it was quite a celebration.”

Jarrett went on to win a total of 32 NASCAR Sprint Cup Series race, including 30 with Ford, and claimed the 1999 series championship while driving the No. 88 Quality Care/Ford Credit Taurus for Robert Yates Racing.

This Week In Racing History (August 7-13)