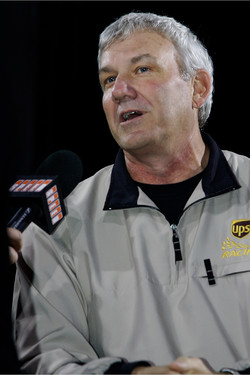 Editor’s Note: In honor of Interstate Batteries’ and Joe Gibbs Racing’s 20th anniversary together in NASCAR, a series of press releases highlighting 20 big moments will be distributed throughout 2011. This is the 16th of the 20 releases.

It was the impossible comeback that will likely never happen again in the NASCAR Sprint Cup Series.

In October 1994, Dale Jarrett, driver of the No. 18 Interstate Batteries car for Joe Gibbs Racing (JGR), failed to qualify for the Tyson Holly Farms 400 at North Wilkesboro (N.C.) Speedway. Eight days later, he was celebrating in victory lane as the winner of the Mello Yellow 500 at Charlotte (N.C.) Motor Speedway.

At the time, there was no “top-35” rule guaranteeing starting spots for the cars first through 35th in Sprint Cup Series owner points as only past champions were awarded a spot if they did not post a fast enough time to qualify.

After winning the Daytona 500 in 1993 and finishing an impressive fourth in points, 1994 was a down year for the No. 18 team. Heading into North Wilkesboro, Jarrett was 18th in the standings and had already announced he was leaving the team at the end of the season to drive for Robert Yates Racing. It would later be announced that Bobby Labonte would take over the Interstate Batteries car for the 1995 season.

Meanwhile, with the team struggling and the driver leaving, the mood around the shop wasn’t exactly jovial in the fall of 1994.

“It was kind of miserable because we knew Dale was leaving,” said Jimmy Makar, at the time the crew chief of the No. 18 Interstate Batteries car and now senior vice president of racing operations for JGR. “And, on top of that, we weren’t having the year we had hoped to have, especially after finishing fourth in points the year before.”

The 27th race weekend of the 1994 Sprint Cup Series season certainly didn’t do anything to help morale at the shop. While the team was struggling, missing a race was unthinkable – until it happened.

“As the years have gone by, so much has happened that you tend to forget certain things, but that is one week I remember very vividly,” Makar said with a laugh. “There are only a few weeks that stick out vividly and that is one of them.”

At the time, two tire companies were supplying tires to Sprint Cup Series teams – Goodyear and Hoosier. The tire war was in full effect and ended up costing Jarrett and Makar a starting spot at North Wilkesboro.

“We were a Goodyear team,” Makar said. “And the Hoosiers were fast to qualify but gave up quickly in the race. Goodyears weren’t great for quick speed but they were much better for the race. We didn’t have a choice, obviously. We had a Goodyear deal, so that’s what we qualified on. And we got beat by someone, I can’t remember who, but they had Hoosier tires on and they beat us by .003 of a second or some slim margin like that. So they bumped us out. And it added to an already not-so-great year. Missing that race kind of put it in the tank.”

If missing the race wasn’t bad enough for Makar, his drive back to Charlotte from North Wilkesboro put an exclamation point on a devastating weekend.

“It was the first time any of us had missed a race and had to drive back after qualifying,” Makar said. “I was ill – just miserable – and driving back to Charlotte by myself, I left out the back way from Wilkesboro and was going down Highway 115 through Statesville (N.C.) and I didn’t get 10 miles from the racetrack when the car started making noises. It was a tapping noise and I thought, ‘What in the world is that?’

“I was mad, so I just kept going and it kept getting louder and louder and louder and I realized it was the engine. I was, like, ‘I don’t care. If this thing is going to blow up, then it’s going to blow up, that’s fine.’ So, I just stuck my foot in it and kept going down the road and, sure enough, it blew up. I coasted off into somebody’s driveway and I thought, ‘OK, what am I going to do now?’ And about that time, Butch Mock and his boys came down the road behind me – they had missed the race, also. So I hitched a ride with them back to Charlotte.”

Makar found himself with a driver leaving, a down-and-out race team and a personal vehicle not working as he reported to Joe Gibbs Racing headquarters on Monday before the upcoming Mello Yellow 500 at Charlotte. He had no idea how his – and the team’s – fortunes would turn around in just six days.

“I remember, that week Jimmy and I had meetings and we had meetings with the guys,” Jarrett said. “We just realized that it was a big setback but we had to go and do what we could do at Charlotte. It was a track we had run well at in the past and we were just trying to keep everybody as pumped up as we could. We were mainly going to try and have a solid effort and we talked about going and getting ourselves back on track. I don’t think we ever talked about going over there and winning.

“The weekend went pretty smoothly and everyone was upbeat. I knew we had a pretty good car, but I didn’t know we had a great car.”

Jarrett started 22nd and began working his way to the front while Geoffrey Bodine, who started sixth, dominated the event by leading 202 of the first 290 laps. But when Bodine’s engine blew on lap 290, the race became wide open and Jarrett was in contention. Jarrett, Brett Bodine, Ken Schrader, Morgan Shepard and Darrell Waltrip all had a shot at the victory, but it was Jarrett who passed Shepard with four laps remaining to claim the victory.

Amazingly, Jarrett led only six miles all night, but they were the last six miles and the most important.

“Things just kind of fell our way,” Jarrett said. “Jimmy made some great adjustments on the car and it became one of those days where you knew you were going to have a chance to win. And, as the day wound down, we were able to do that. It was a big boost for everyone and it was just incredible to think that a team could miss the race the week before and then come back to win the very next week.”

And, even years later, the improbability of such events remains with both Jarrett and Makar.

“It’d be pretty tough to do,” Jarrett said. “Especially because of the top-35 rule because the teams outside the top-35 aren’t usually running all that much or don’t have the funding to run as well as the top teams. I don’t think it’s something that could happen again. The only way possible might be if a team missed the race before Talladega and then caught a break and won at Talladega. But it would still be awfully hard to accomplish.”

“I don’t think it could happen,” Makar said. “The cars that are outside the top-35 are cars that are probably not going to win a race, anyway. It would take a real funky situation to make that happen. There’s a lot less of a chance now than there was back then, just because years ago you had some really good cars that could still go home with the way the rules were. Especially back in the tire war days because you just never knew who was going to show up with a sticky tire that was really good in qualifying, but wouldn’t race worth a darn.