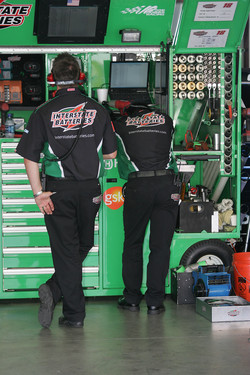 Editor’s Note: In honor of Interstate Batteries’ and Joe Gibbs Racing’s 20th anniversary together in NASCAR, a series of press releases highlighting 20 big moments will be distributed throughout 2011. This is the 18th of the 20 releases.

When Jimmy Makar was hired as the first employee at Joe Gibbs Racing (JGR), he didn’t report to the shop on his first day of work in August 1991, and the reason was simple – there wasn’t a shop. In fact, there wasn’t much of anything except a sponsor and a driver.

When Joe Gibbs decided to form a NASCAR Sprint Cup Series team in 1991, the order of occurrences was quite simple: he signed Interstate Batteries as a sponsor and then hired Dale Jarrett to drive what would be the No. 18 Interstate Batteries car. Next, he hired Makar, who spent the first half of the 1991 season with Penske Racing with driver Rusty Wallace after six seasons with Blue Max Racing, which won the 1989 Sprint Cup Series championship with Wallace behind the wheel.

Makar was hired in August 1991 and was brought in to build the team from the ground up. That included hiring a crew, finding a shop and buying parts and pieces so the Interstate Batteries car would be able to partake in preseason testing in 1992 at Daytona (Fla.) International Speedway.

Easy, it was not.

“Joe had an agreement with Hendrick Motorsports to supply engines for the cars,” said Makar, who is now JGR’s senior vice president of racing operations. “He also bought some old cars and parts, which ended up being the remnants of the 17 team, the Tide team that Darrell Waltrip drove for. So that’s what he had.”

Waltrip had left Hendrick following the 1990 season to form his own team, Darrell Waltrip Motorsports.

“The first order of business was to go over to Hendrick and find out what Joe bought because he literally had no idea what he bought,” Makar said. “We went over to Hendrick and went in one of the back buildings. It was a warehouse and there was all this stuff that went with the sale. There were three cars, one short-track car and a couple of other cars, and a bunch of scrap parts, basically. Just miscellaneous stuff and about half of it was not useful for what we were going to do. It wasn’t that it was bad stuff, it just wasn’t the direction I was going in as far as brakes and other parts.

“So, basically, we had to figure out what was going to be useful for getting the race team up and running and what would be sold or thrown away. That’s exactly what we did the first week.”

Fortunately, Makar had some help as David Wagner was hired by Makar shortly after he began with JGR. Wagner, who plans to retire from JGR following the 2011 season, is the special projects manager for the team.

But while Wagner and Makar had taken inventory of the parts and pieces from Hendrick back then, they still didn’t have a place to put it.

“We didn’t have a building,” Makar said. “Thankfully, we located a building fairly quickly over on Harris Boulevard in Charlotte. But it was a warehouse with just a few offices on the front side of it. So we had to turn it into a race shop and that meant dividing it up into a fabrication department, a car prep department and a paint booth – things like that. We spent a lot of time getting that done. I think we finally moved in about a month after I was hired.”

Before they were able to move into the shop, however, Makar and Wagner essentially worked out of Makar’s house in Mooresville, N.C., ordering all the things needed to get a race team up and running. And perhaps the biggest need couldn’t be ordered from a part supplier – people.

“I was going to races on the weekends for two reasons,” Makar said. “One, Dale was still driving for the Wood Brothers, so I would listen to him on the radio to get an idea of how he communicated. The other reason, though, was to recruit people to come to work at JGR.”

And that was not easy, either.

“The challenge in it was getting people to come to work at a start-up operation that nobody had any idea how long it would last,” Makar said. “It was a football coach and, at the time, Dale, who hadn’t won a race, yet. It was an unproven driver with a football coach owner starting from scratch. People weren’t anxious to jump on board to go do something like that. But we hired some really great people and it’s so different than it is today because, back then, we had 15 people and that was it. That was all we needed.”

By November 1991, while Makar wasn’t comfortable by any means, he at least knew he had a team assembled and could look toward pre-season testing at Daytona. And when the team turned its first laps at Daytona in January 1992, Makar knew he had at least accomplished something.

“It was a good feeling, but we knew we weren’t out of the woods,” Makar said. “Daytona was just one race and then you roll right into another race right after that. We still had a lot of work to do. It wasn’t like we stood there and said, ‘Ah, we’ve done it.’ It was more a matter of, ‘OK, that’s done, what’s next on the list?’”

The “list” has grown extensively in Makar’s 20 years at JGR and he’s been a part of all three Sprint Cup Series championships the team has claimed, as well as 94 Sprint Cup race victories and 55 Sprint Cup pole positions.

And none of it would have happened had Makar and Wagner not gone through a warehouse of used race car parts at Hendrick Motorsports in 1991.