Having been part of Peugeot Sport’s present right up until the manufacturer announced its shock withdrawal at the start of this season, Frenchman Nicolas Minassian was able to sample the team’s past at the recent Silverstone Classic historic motorsport festival, where he got behind the wheel of one of the last, and greatest, Group C cars: the Peugeot 905. Now owned by British pub and restaurant magnate Rupert Celevely, the rarely used machine was prepared for the event by the Chamberlain-Synergy Motorsport outfit. Minassian’s first taste of the iconic low-slung prototype came in Friday’s qualifying session, and he was immediately impressed.

The ace sports car racer expressed his thoughts in an exclusive interview at Silverstone with Motorsort.com. The reporter and the driver discussed the Silverstone Classic, the World Endurance Championship, and the possibility of Sebastien Loeb Racing entering the Petit Le Mans event later this year.

“This was my first time in the 905, and it’s really fantastic,” he says with a smile. “It’s funny, because it doesn’t feel like an old car. I’ve driven historic cars before, but this does feel like a proper factory-run machine. Chamberlain-Synergy have done a very good job preparing it, but the set-up hasn’t been adapted yet. The car hasn’t race since Le Mans in 1992, so it still has the full Mulsanne straight aero kit, which is a very low-downforce set-up. But it’s still really well balanced and the engine is fantastic. Everything works perfectly: I don’t feel like I’m struggling to drive it because it’s so old – it definitely doesn’t feel 20 years before my time.”

Minassian of course has extensive experience racing the 905’s 21st-century descendent, the diesel-powered 908. So how do the two machines from the same stable compare? “The 905 feels quite different, because it’s a much stiffer car,” says Minassian. “That’s mainly because the tyres worked differently back then compared to how they do now. There’s hardly any suspension movement at all. It’s lighter than the 908, too, and it’s a bit easier to drive than the diesel, as there’s no turbo and not as much torque, so it’s more driveable out of corners. But I was impressed by how much grip it has – there’s a lot for a 20-year-old car. Although I’m not really surprised when I look at the lap times this car used to do at Le Mans – they’re similar to what I was doing in the 908.” 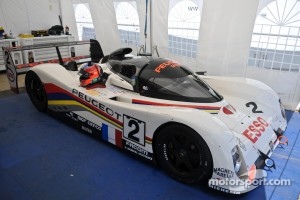 The Silverstone Classic fell shortly after news broke that the two remaining rounds of the European Le Mans Series had been cancelled and the championship would instead hold a combined season finale with the ALMS at Road Atlanta. After Peugeot Sport cancelled its programme, Minassian was quick to sign up for the ELMS with French multiple World Rally champion Sebastien Loeb’s eponymous team, sharing an Oreca-Nissan LM P2 car with fellow Peugeot refugee Stephane Sarrazin and Nicolas Marroc. And although the overall turnout for the series’ first two rounds was disappointing, he has nonetheless greatly enjoyed the intense competition that’s been a feature of LM P2 this season. “The team is very well organised and the engineer I used to work with at Peugeot is now working at Loeb Racing as well,” says Minassian, “so everything works really well. The way things are right now, I much prefer fighting for wins in P2 rather than struggling in P1.”

Struggling in LM P1 was something Minassian did a lot of at Le Mans this year, driving a Dome S102.5 for Pescarolo Sport – a team he last raced for back in 2006. “Le Mans was tough,” he states simply. “The engine vibrated a lot, and lots of other things went wrong that shouldn't. I don't know if it was because of Seiji [Ara]'s crash on Thursday night, but the car never felt right after that. It's a shame, because basically the Dome is a really good car and really nice to drive. But sometimes racing is like this: sometimes it works, sometimes it's a nightmare!”

And as if to ram that point home, gearbox trouble prevented the Peugeot 905 from playing any part in either of the Silverstone Classic’s two Group C races, although there was an unexpected bonus for the Frenchman when Cleveley offered him a seat in another of his historic racing fleet: a Lancia LC2. Minassian took the car to second overall in Sunday's 30-minute race, battling with Porsche 962s and a Sauber-Mercedes C9. He found the 30-year-old Italian machine to be a much different prospect to the 905. “That’s a wild, wild car,” he exclaimed on the podium afterwards. “And with the manual gearbox and clutch, it’s so physical – I was pushing very hard and I’m surprised by how tired I am after only half an hour driving it.” 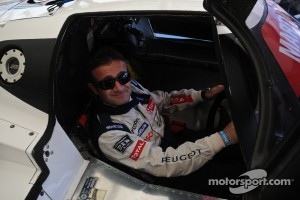 With the Classic out of the way, the rest of 2012 is looking decidedly quiet for the ex-Peugeot works driver, with no more top-line race appearances confirmed. Minassian doesn't know yet if Loeb Racing will take up the offer to race in the combined ALMS/ELMS finale at Petit Le Mans. “I don't really know what's going to happen with that, but whatever Loeb Racing decide to do, I'll be involved,” he says. “It's a shame, because it was actually a great championship, there was just not enough people doing it. But when you split championships all over the place, that's what's going to happen.” The other possibility is that the Dome will run again at the Japanese team's home race – the Fuji round of the World Endurance Championship. “We've talked about it, but they haven't said they're going to do it for sure – I hope they do.”

And there remains the intriguing possibility that Sebastien Loeb himself will grow tired of his on-going dominance of the World Rally Championship, and seek to complete the challenge he began during his two outings at Le Mans for the Pescarolo team in 2005 and 2006 – the latter year as team-mate to Minassian. “It would be good to have him in the car – just not taking my place!” laughs Nicolas. “He's a great guy – for somebody who has won as much as him, he has a very humble, simple personality, and he' just so talented: he jumps in anything and straight away he's quick. It's a very natural, unforced speed – it comes very easily to him.”

Celebrating the history of the Goodwood Festival of Speed