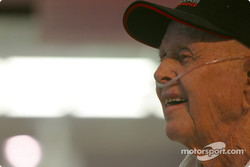 Over the years, Papa Joe Hendrick became a fixture at Hendrick Motorsports, most recently co-owning the No. 25 NASCAR NEXTEL Cup Series team and the No. 5 NASCAR Busch Series team with grandson Ricky Hendrick, while spearheading the organization's show-car operation.

A decorated veteran, Papa Joe proudly served his country in World War II as a flight engineer and gunner in the Air Force.

In June, Gov. Mike Easley presented Papa Joe and his wife, Mary, with the Order of the Long Leaf Pine -- the state of North Carolina's highest honor bestowed on a citizen for dedication and extended length of service to his or her organization.

Visitation will begin at 11 a.m. on Saturday and will be immediately followed by a 1 p.m. memorial service at the Central Church of God, 5301 Sardis Rd., Charlotte, NC 28270.

For friends and family in Virginia, a Sunday graveside service will be held at Union Chapel Methodist Church in Palmer Springs at 2 p.m.

In lieu of flowers, the family requests that donations be made to:
Nazareth Children's Home
P.O. Box 1438
Rockwell, NC 28138