Several Dulux Trade MSA British Rally Championship drivers are taking part in this year’s Goodwood Festival of Speed which takes place from this Thursday (30th June) at the historic venue near Chichester in West Sussex.

The forest rally stage will echo to the sound of both four and two wheel drive cars from the championship, headed up by BRC front-runner Jonny Greer in his Škoda Fabia S2000. Fresh from his first foray into the Intercontinental Rally Challenge in Belgium last weekend, Jonny, who lies third in the British series, is there under the Škoda UK banner and will be rubbing shoulders with their official works driver Andreas Mikkelsen. 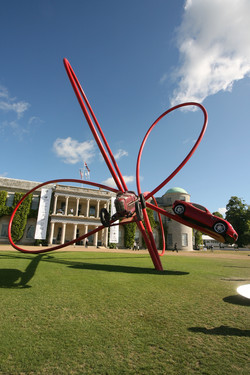 Also attending, but opting not to take his championship leading Mitsubishi is David Bogie, the Scot citing a tight work schedule for his absence from the Škoda sponsored Forest Rally Stage. He won the chance to attend courtesy of his production class victory on Rallye Sunseeker at the start of the 2011 season, the Richard Burns Award now an established part of the event.

Fourth at this point in the BRC season is Adam Gould, who has had his car repaired early specially for Goodwood. Having briefly led the Jim Clark Rally, he dropped down the order after a series of minor excursions into the Scottish hedges and banks, but a weekend in Ypres should have left him fresh for this must-see motorsport event.

Rallye Sunseeker sensation Tom Cave and WRC Academy driver Molly Taylor are at Goodwood representing the International Rally Drivers’ Club, flying the flag for the IRDC which has offered an award to the most improved driver in the BRC for several years.

Their cars will take centre stage on the IRDC stand which is in the rally service park area immediately adjacent to Škoda’s substantial hospitality unit.

Leading the Dulux Trade MSA British Formula 2 Rally Championship and rumoured to make an announcement for his plans for the 2012 season is Martin McCormack. The Northern Irish Citroën DS3 driver has impressed the top brass of the French marque and will be at Goodwood in an “official” capacity – watch this space.

Leading the Dulux Trade MSA British Teams Rally Championship, Autosport Technology will field just one of its Twingos at the event; the decision of which driver to run a difficult one which eventually fell to Finnish ace Mikko Pajunen. Passenger runs in his car are being auctioned off by the Richard Burns Foundation, proceeds going to the late BRC and WRC champion’s charity.

Of the teams and drivers attending the event, the most frustrated is likely to be Callum Black. He is unable to drive as he has a minor medical procedure scheduled for Thursday, but his 586 Sports outfit will be there with a car, although not the usual Suzuki Swift. The team will run the official Audi Quattro S1 of 1978 British and 1983 World Rally Champion Hannu Mikkola.

While the list of Dulux Trade MSA British Rally Championship drivers at Goodwood might not the same make headline news as some of the huge motorsport stars of past and present, it is certainly worth making a trip to the forest stage to see them in action. Whether at the wheel of their cars, or just mixing with the massive crowds at this internationally renowned event, the significant BRC presence is testament to the status of the series in world motorsport.

The gates open daily from 7am to 7pm with the rally stage in action from 9.30 daily from Friday.

VR46 team to race in MotoGP from 2022 with Saudi backing

VR46 team to race in MotoGP from 2022 with Saudi backing