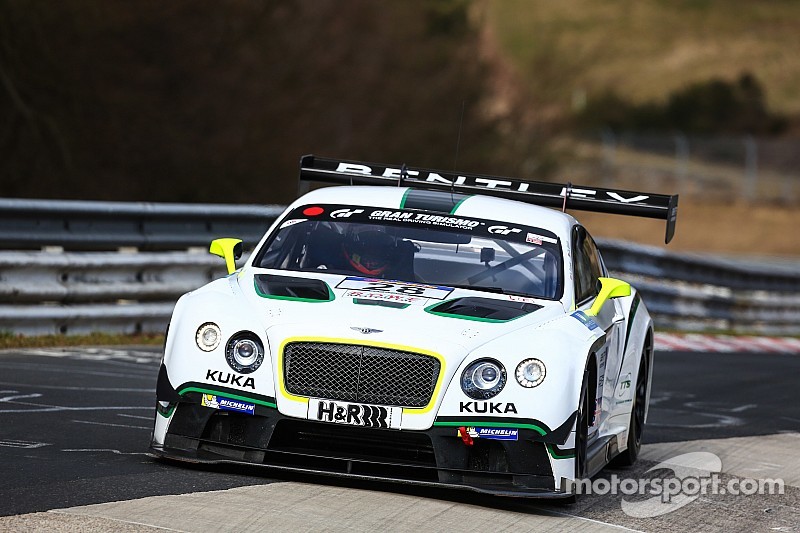 Harold Primat and his Bentley Team HTP crew-mates made up a massive 57 positions to claim 10th in class at round two of this year’s VLN Endurance Series on Saturday (April 25) as the cream of European GT racing made its final preparations for the Nürburgring 24 Hours.

Mixed weather conditions throughout the day certainly proved useful for refining set-up, while the performance of the team’s sister car at the head of the field suggested that a better result would have been possible without a series of issues that blighted Primat, Christopher Brück and Marco Seefried’s race.

The first incident had the greatest impact when another car clashed with Brück at the start of qualifying. Although the damage was repaired, weather conditions had deteriorated by the time he re-emerged from the pits, consigning the #34 Bentley Continental GT3 to 70th overall amongst the colossal 190-car field that featured 24 mostly factory-supported SP9 entries.

Brück was back behind the wheel for the start of that afternoon’s four-hour race around the 26-kilometre-long Nordschleife, and immediately set about recovering the situation. Indeed, the Bentley was up to 16th by the time he handed over to Primat.

Describing the subsequent stint as probably his best ever at the ‘Green Hell’, the Swiss ace had picked up several positions and was running P8 overall when the heavy rain returned.

“It started to drizzle just as I was coming up to the pit-in line and I had to make a split-second decision whether to stop,” he explained. “I would have been a lap early, the team weren’t expecting me and I knew the sister car was in the box, so I opted to stay out and hope to make it around once more. Then, as I reached Turn 1, the heavens opened and I realised it would be silly to try and do another lap, so took the GP track’s route back around to the pits. It cost us maybe 90 seconds but the alternative could have been much worse.”

Seefried, who had never driven the car before Saturday, did well to maintain the pace but ultimately lost a couple of spots with a late splash and dash fuel stop. Nevertheless, 10th in class and 13th overall was still a good return considering the crew’s qualifying travails.

“All in all I think we can be pleased with our weekend’s work. We know how the car behaves in the mixed conditions, which we’ll almost certainly experience at the 24 Hours, and will be working between now and then to maximise our set-up,” continued Primat. “There’s certainly more to find in the wet but I’m very happy with our dry pace and the car’s balance, so lots of potential.

“We’ll need to be at our very best in May because the strength of the competition is incredible at the moment. The quality of teams and drivers means you can’t take your eye off the ball for a moment, even over 24 hours. It’s going to be an amazing race.”