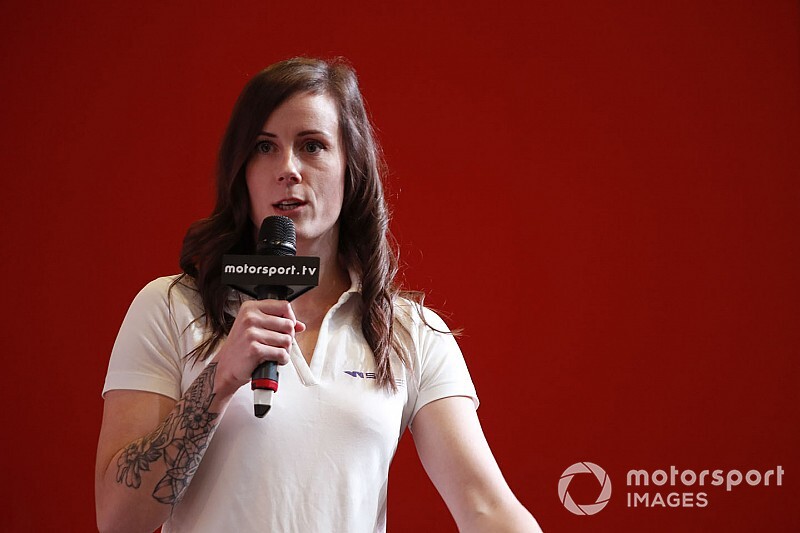 Abbie Eaton has admitted she was "wrong" to be critical of the W Series when it first launched, ahead of making her debut in the championship in 2020.

Eaton, who also acted as The Grand Tour's test driver during its second and third season on Amazon Prime, was a vocal critic of the series when it launched in 2019, alongside other leading female drivers such as Pippa Mann.

Eaton opted against entering the process to earn a W Series ride in 2019 and was in the midst of trying to move onto Australia's Supercars ladder, managing to make it onto the grid for the Super2 opener in Adelaide - but she was unable to make a switch full-time.

She then entered the Almeria shootout to earn a place on the 2020 W Series 20-car grid and succeeded, meaning she will now make her single-seater debut this year.

Asked on the 2020 Autosport International main stage if her high-profile role on the Grand Tour could boost the W Series, Eaton said: "Yeah, a lot of people have said to me ‘you’re a fraudster, going back on what you said to start with', but actually I can put my hands up and say I got it wrong.

"I’m excited to get racing again, without this opportunity I’d be sitting at home. With what happened in Australia, that’s what I did a lot of last year - sitting at home watching these guys race.

"The level of competition out on track is extremely high and I know I have my work cut out for me this year to get into it."

The 2014 Mazda MX-5 Supercup champion also said that her future rivals this year were 'brave' for joining the grid for the W Series' first campaign in '19.

Eaton added she was initially "sceptical about segregating the two genders" and asked herself if it was "actually positive long-term" and if it was "going to work".

Her CV has also included previous spells in British GT, GT Cup, the Production Touring Car Championship and a one-off appearance in the Blancpain GT Series Endurance Cup back in 2017.

Asked if her high profile put a target on her back, Eaton said: "Yeah, a lot of people in interviews asked who my biggest competitor is on track and I said ‘you guys [in the media] and what you’re expecting me to do’.

"Ultimately I haven’t had previous single-seater experience. But this is a year I can learn and I’ve got to get stuck in."

The W Series will begin its 2020 season on May 29-30 at new Russian venue Igora Drive as part of an initial six-round calendar.

Eighteen of the 20 slots on the grid this year have been filled and the series is expected to make more announcements ahead of its season getting underway.