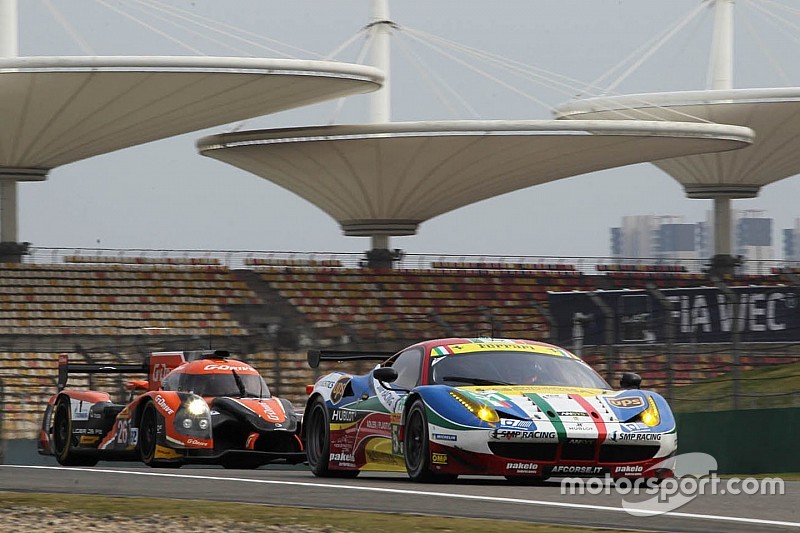 Shanghai – The rain, which had threatened to spoil Ferrari's plans two weeks ago at Fuji, certainly succeeded on Sunday in Shanghai where, after monopolising qualifying, the 458 Italias in the GTE-Pro class only managed a podium finish, with car no. 51 of Gianmaria "Gimmi" Bruni and Toni Vilander taking second. Car no. 71 of Davide Rigon and James Calado came fourth. Victory went to the Porsche of Richard Lietz who is closing in on the Drivers' title, while Ferrari holds first place in the Manufacturers' standings with just one race to go, the 6 Hours of Bahrain at Sakhir on 21 November.

The race kicked off in light rain, which quickly became heavier. Toni Vilander initially managed to hold the lead in car no. 51 while no. 71, with Davide Rigon at the wheel, was bumped by Porsche no. 92 and lost three positions. Porsche took advantage of the rain to secure first and second, with the no. 91 of Richard Lietz and Michael Christensen powering ahead. Behind the Ferraris continued to fight it out with Porsche no. 92. At the two-thirds mark no. 71, with James Calado, suffered a puncture that ended any hopes of a podium finish. The rain finally stopped falling two and a half hours from the end, and about 60 minutes later it was possible to fit slicks tyres.

At that point Vilander handed over to "Gimmi" Bruni who fought back to within shouting distance of no. 92. At the final pit stop, the Porsche changed tyres and driver, while the Ferrari with Bruni simply refuelled and made its exit ahead of its rivals to secure a second place important for the Constructors' championship where the Prancing Horse remains in command. However, Lietz's win combined with the fourth place of Rigon and Calado complicates the drivers' standings. Both crews are still in contention but only Lietz's withdrawal could reverse the situation in Bahrain.

The GTE-Am class saw a day marked by penalties, but also the domination of the 458 Italias. Victory went, for the first time this season, to car no. 83 of AF Corse crewed by François Perrodo, Emmanuel Collard and Rui Aguas who were strongest even after a drive through due to an infraction at the pit stop. The three crossed the line ahead of Aston Martin no. 98 driven by Paul Dalla Lana, Pedro Lamy and Mathias Lauda, and Ferrari no. 72 of SMP Racing driven by Victor Shaytar, Aleksey Basov and Andrea Bertolini, also penalised by a stop&go for making a pit stop when the pitlane was closed (in a Full Course Yellow phase). The result of Sunday's race means that only Ferrari crews will be fighting for the title in Bahrain, with no. 72 enjoying a 19-point lead.

Antonello Coletta, Head of Attività Sportive GT: "We are obviously disappointed by the result of the race. The bad weather stopped us from achieving the pace with which we conquered the entire front row in qualifying. In the last hour and a half on a drying track we showed the pace of the 458 Italia. In the final stages AF Corse and "Gimmi" Bruni did very well to win a second place that maintains our lead in the Constructors' standings. While the situation in the Drivers' Championship is clearly compromised, we still lead the Constructors’ table, the more important for us, and in Bahrain we will do our best to try to achieve the victory.

However, it is nice to know that the assignment of the GTE-Am drivers' title will be an internal matter for Ferrari crews. François Perrodo, Emmanuel Collard and Rui Aguas won a deserved first victory of the season on the AF Corse car no. 83, while the third place for the 458 Italia no. 72 by SMP Racing brings Andrea Bertolini, Aleksey Basov and Victor Shaytar to within reach of the title".

“Gimmi” Bruni, driver car #51 (2nd GTE-Pro): "It is difficult to battle it out with Porsche in such wet conditions. We expected to start in the wet but were hoping that it would stop in the first two hours. It wasn't to be and the track stayed wet for four and a half hours. When were able to fit the slicks we were the fastest on track and we tried to get in front of the second Porsche by not changing tyres. It was a risk, because I was struggling a lot at the end of the race but the strategy was spot on. If we hadn't raced in these conditions, the result would have been different. Now I want a third consecutive win in Bahrain, to give Ferrari the Constructors' title and then see what happens in the drivers' standings..."

Toni Vilander, driver car #51 (2nd GTE-Pro): "Before the start, the mechanics had predicted that I would be in the car for four and half hours, worse than Fuji. I laughed and didn't believe it, but they were right! Clearly the rain favoured the performance of Porsche. At the first pit stop we tried to react and stay close to them, mounting new tyres but as the rain increased they performed even better while I didn't notice appreciable improvements at the wheel.

So we decided to keep the same tyres in order to save time in the pits, also continuing to do the same with "Gimmi" later. The strategy worked, and as the track dried the performance improved. We thought it was going to rain for 90 minutes, not for 270... In these conditions, Porsche is better. Now we have roll up our sleeves. We are ahead in the Constructors' Championship and we are not mathematically out of the Drivers' one. We'll try to win in Bahrain and then see how it goes...”.

Davide Rigon, driver car #71 (4th GTE-Pro): "It was a difficult race, worsened by the puncture that deprived us of the chance of a podium finish and to stay close to Lietz in the Drivers' standings. Unfortunately the Porsche is markedly better in the wet. Now we just have to focus on Bahrain, where it shouldn't rain, and try to win the Constructors' title for Ferrari. It's tough in the Drivers' Championship, but we will fight to the finish".

James Calado, driver car #71 (4th GTE-Pro): "Today was certainly un unlucky day, above all due to the bad weather, which was then compounded by a puncture. We had to make a pit stop and we lost over a minute. I must say that today we were really unlucky, but now we must strive to think positive and go to Bahrain with a fresh head, ready to take advantage of any situation. We are still ahead in the Constructors' Championship and we will give our best to win and hold the name of Ferrari high".

WEC constructors’ title decided: After less than two years the Porsche 919 Hybrid takes it all