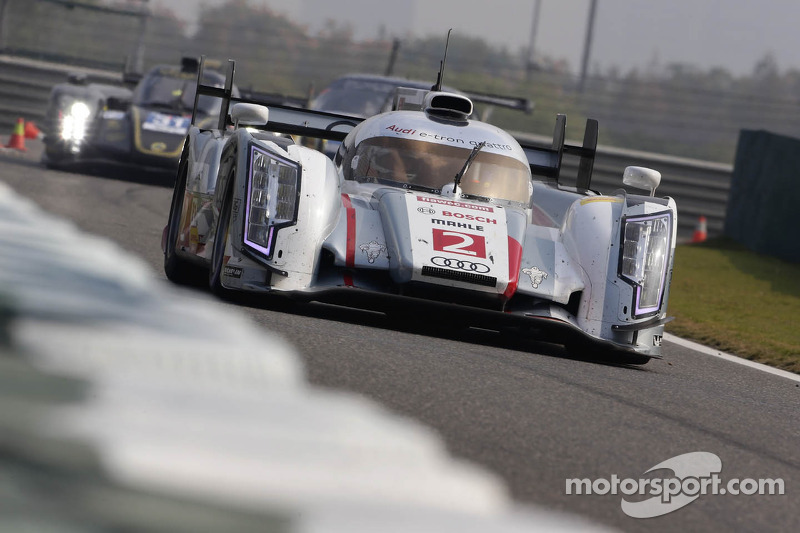 No.2 Audi R18 e-tron quattro led the way for the opening session of the weekend.

‘Nihao’ from Shanghai International Circuit, the venue for the penultimate round of the FIA World Endurance Championship, the 6 Hours of Shanghai. The first official two-hour Free Practice session has taken place in temperatures of up to 20oC and between 75-84% humidity, and the 28 entries for tomorrow’s race have all taken to the track to establish their cars’ technical set up and collect data to help them prepare for the race. It is a busy day today with two practice sessions and qualifying later this afternoon.

The World Championship-leading driver line up of the No.2 Audi R18 e-tron quattro (Kristensen-Duval-McNish) led the way for the opening session of the weekend, Allan McNish setting a fastest lap of 1:47.442. This placed the Audi 0.407s ahead of the No.8 Toyota TS030 Hybrid of Davidson-Buemi-Sarrazin – the Swiss driver, Buemi, setting the best time for the Japanese manufacturer with a lap of 1:47.849. Third and fourth in the LMP1 category were the No.1 Audi Sport and No.7 Toyota entries.

Rebellion Racing have welcomed back Nicolas Prost to the No.12 Rebellion Racing Lola-Toyota, the Frenchman driving alongside Andrea Belicchi and Mathias Beche in the LMP1 Privateer entry and setting the benchmark for the mini-class with a time of 1:52.227.

LMP2 provided some close competition, as in previous rounds, and the ORECA 03 Nissans of Delta –ADR and G-Drive Racing were heading the category. Robbie Kerr, returning to the team for the first time since the 6 Hours of Sao Paulo to drive alongside Tor Graves and Craig Dolby, set the fastest lap of the class in the No.25 Delta-ADR (1:55.264), 0.56s ahead of the sister No.26 entry of Rusinov-Martin-Conway. Third in class was the No.24 OAK Racing Morgan-Nissan of Pla-Heinemeier-Hansson-Brundle, the Briton setting the best lap time of 1:55.984 ahead of the No.41 Greaves Motorsport Zytek-Nissan, the No.35 and 45 OAK Racing Morgan-Nissans, the No.49 Pecom Racing ORECA Nissan and the two Lotus Praga T128 entries.

In LMGTE Pro it was the No.97 Aston Martin Racing Vantage V8 which led the way, its fastest lap of 2:04.637 being set early on by Stefan Mücke who shares the car with Darren Turner. The British manufacturer led the No.92 Porsche AG Team Manthey 911 RSR of Marc Lieb-Richard Lietz by the narrowest of margins, just six hundredths of a second separating the two. In third place was the No.51 AF Corse Ferrari 458 Italia of Gianmaria Bruni and Giancarlo Fisichella, its best time being 2:04.894.

Porsche and Ferrari also figured strongly in the LMGTE Am category, this time the German marque setting the pace. The No.88 Proton Competition Porsche 911 GT3 RSR of Ried-Roda-Ruberti were at the top of the classification with a best time of 2:05.030, placing it ahead of the No.61 AF Corse Ferrari of Cioci-Griffin-Gerber by a margin of 0.21 seconds. Third in the class was the No.96 Aston Martin Racing Vantage V8 of Campbell-Walter-Hall-Adam with a time of 2:05.759.

AF Corse in Shanghai: The target is to keep the first positions

6 Hours of Shanghai FP2: Ferrari on top in GTE Pro with Audi ahead of Toyota