For Greaves Motorsport 2011 was always going to be a hard act to follow, winning at Le Mans and becoming European Champions is no small achievement, especially with two Silver drivers in the mix.

However the team approached the 2012 season with ambitions and goals to take the organisation onto the next level and in most aspects they have succeeded in their aims. The partnership with Nissan flourished as did the relationship with Zytek and Dunlop. 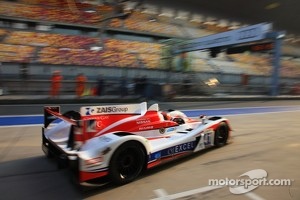 The final Chequered Flag of a long, hard season has been waved and the engines are now silent, so it is time to take stock, consider the events of 2012 and finalise the plans for 2013.

The numbers make interesting reading, as they always do.

11 events in 8 countries on 3 continents, the thick end of 70,000 miles travelled, 94 hours of racing, two cars in two Championships and 12 finishes, always in the points, and a top five position in the new FIA World Endurance Championship.

But what lies behind the statistics? The ACO’s LM P2 class has seen a substantial increase in the quality and quantity of the teams, drivers and cars over previous years, it is now arguably the most competitive category in endurance sportscar racing.

Most teams ran two professionals in their choice of drivers, Greaves Motorsport chose the more commercially viable mix of two Silver drivers with a single Gold.

The results achieved often exceeded those of teams with a theoretically superior line up.

High points of the season have been podium points finishes at three of the greatest endurance arenas, Spa, Petit Le Mans and Le Mans, and add to that solid fourth places at Sebring and Interlagos.

The highly experienced team has displayed a calm maturity when adversity has been encountered and enjoys a reputation for fixing any problem during the weekends with speed and accuracy.

Away from the races, there have been significant developments, moving into a new, purpose-built, 15,000 square foot workshop where an investment in the engineering sister company, Greaves 3D Engineering, has quietly being going on, more of that later.

The team has enjoyed fruitful partnerships with Nissan as well as Zytek and Dunlop but also there have been relationships with a number of other organisations during the year all of whom have contributed to the team’s progress.

Special mention must be made of Mme. Renate Ojjeh, the owner of car #41, and one Greaves Motorsport’s biggest supporters. For the past three seasons Mme.

Ojjeh has been an integral part of the team, travelling to almost all of the races and reinforcing the real sense of family that exists within Greaves Motorsport.

Greaves Motorsport is a team that develops drivers with several arriving as Silver and leaving as Gold. For example, in 2011 Olivier Lombard joined the team for Le Mans with his experience of LM P2 prototypes restricted to 15 laps at Rockingham Speedway.

Olivier went on to set the car’s fastest lap during the French Classic and was a key figure in the team supporting Tom Kimber-Smith and Karim Ojjeh.

This year Lucas Ordonez and his team mate, Alex Brundle, have graduated from Silver to Gold. Not all the drivers aspire to Gold status, but this elevation is a testament to the performance of the team and the car, as well as the drivers.

In 2012 our principal gentleman driver was Christian Zugel , who is known by the team as the man with the biggest smile in the pit lane - it may even be bigger than Karim’s!

Together with his co-drivers, Ricardo Gonzalez and Elton Julian, Christian has had some great results and we look forward to having Ricardo back in the team next season, hopefully with Christian, to build on the results achieved.

An announcement on drivers will be made presently as the current line up decide their plans. The sister car was shared by Tom Kimber-Smith, Alex Brundle, Martin Brundle, Lucas Ordonez and Alex Buncombe in a matrix of combinations.

Their Nissan powered Zytek prototype had more than its fair share of issues, a good example being Tom being punted off at Atlanta and then suffering, as a direct consequence, severe transmission problems.

On the other side of the coin, pole position at Silverstone was evidence of the team’s pace and performance. The car and drivers benefited from the partnership with Nissan and were always at the sharp end of the action.

Greaves Motorsport is looking forward to the 2013 season, announcing their intention to run both of their Nissan powered Zytek prototypes in the FIA World Endurance Championship as well as other selected events, beginning with the 12 Hours of Sebring in March.

Any development of the cars is strictly controlled under cost capping regulations but we are sure that there are minor areas that the team can optimise to improve the overall package.

Team Manager, Jacob Greaves. “2012 has been a year of development for Greaves Motorsport, building on the foundations of our Championship year.

We competed in the new FIA World Endurance Championship, ran two cars in the Le Mans 24 Hours, and got both to the finish, including the high profile pairing of Martin and Alex Brundle.

In every aspect we have grown and matured as an organisation. We have a new base to work from and have launched our precision engineering arm. These are all steps in a long term plan that will enable us to be even more effective as a race team and as a business.”