Allan McNish, you will be missed

Another look at the McNish announcement this morning.

It seems just hours ago – and it was – that Allan McNish was tweeting about his anniversary celebration with Kelly, his wife of 11 years and reflecting on that continuing romance. Then we awoke to the bombshell that yes, we’ve seen the last of McNish in an Audi LM P1 car, as he announced his resignation from Audi Sport’s triumphant World Endurance Championship (WEC) squad on 17 December 2013.

It’s been a long and appropriately twisting road for the Scotsman, whom I met during his initial ALMS years, got to know even better when he was with Toyota’s F1 team and we’ve become friends. Real friends. Of course I’m not sure how I thought about McNish three races ago at Le Mans, when he took an opportunistic move on an amateur Ferrari driver in the first hour of the twice-around-the-clock classic and nearly killed himself – and me.

Yeah, the video’s still viral of me walking down the hill from Dunlop, hearing aids off and oblivious to what was going on behind me. I escaped the Audi’s errant wheel/tire/suspension projectile and both McNish and I survived to race another day. I remember going back to Audi’s awesome hospitality area in the Le Mans paddock to find former works drivers Emanuele Pirro and Frank Biela, who embraced me in joy. I’ll take that any day, but not for the same reason…

Allan McNish will celebrate his 44th birthday on the 29th of this month and he’s cited another Scottish legend, Jackie Stewart for knowing when to hang it up: when you’re on top. As the newly crowned WEC world champion for 2013 while driving the Audi R18 e-tron quattro, the 24 Heures du Mans titleholder (for a third time), a three-time American Le Mans Series (ALMS) titleholder, four-time Sebring 12-Hour winner, McNish is an acknowledged ace in the sports car world.

HIs announcement that McNish is leaving Audi Sport’s works team doesn’t state that he’s done with racing; rather it says he’s through with LM P1 racing, following former driving partner Dindo Capello out of the team and leaving Tom Kristensen the last of those 3 musketeers. That could allow McNish to do as Biela did last year, racing an Audi R8 in the GT class at the Rolex 24 at Daytona. I think he wouldn’t mind working, once again, with American Brad Kettler, who was part and parcel of his Audi career in all its incarnations. McNish told me one of the most comforting sights he could see in an endurance race was Kettler’s face as he pulled into the pits. I believe him.

Not simply a great and voracious racer, Allan McNish has always been a fabulous interview as well. He regaled me with stories of trying to get to The Sarthe from his Monaco home last June and we howled with laughter at the comedy and drama that became. I warned him, after his big shunt, to stay away from me these past two races and he kindly capitulated on that, winning his third Le Mans this June in tidy fashion. 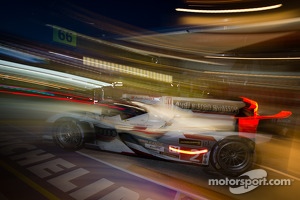 Just as countryman Dario Franchitti will remain with his former Target Chip Ganassi team in the IndyCar Series, Allan McNish intends to remain “in close contact with Audi Sport and contribute his knowledge,” the team announcement said. While Dr Wolfgang Ullrich, Audi head of motorsport respects the success on-circuit McNish has given the team, “We should not forget how valuable he has been in the development of our race cars, how great a team player he has always been and how he has consistently applied himself to achieve Audi’s aims far beyond motorsport, with professionalism, loyalty and commitment.”

Perhaps Allan will devote his talent to further development of Audi race cars; after all, he is the sole racer to have driven in combat all sports car made in Ingolstadt and Neckarsulm, from the Audi R8R through to the R18 e-tron quattro. It’s tough for someone so darn good at their job to quit cold turkey – and very few racers at their apex, as McNish is can do it – so testing, something he did in his F1 years with Toyota and McLaren (strictly as a tester) would seem a good segue.

The Twitterverse, Facebook and all forms of social media are alight with tributes to Allan McNish, as they should be. Just as I’m going to miss the intensity of watching Dario Franchitti strap into an Indy car, so, too, will I wistfully think of Allan McNish jumping through the Audi R18’s coupe’s upraised door.

This man’s intensity behind the wheel and his joyousness outside of it have been the hallmarks of his career. On to the next success, Allan!