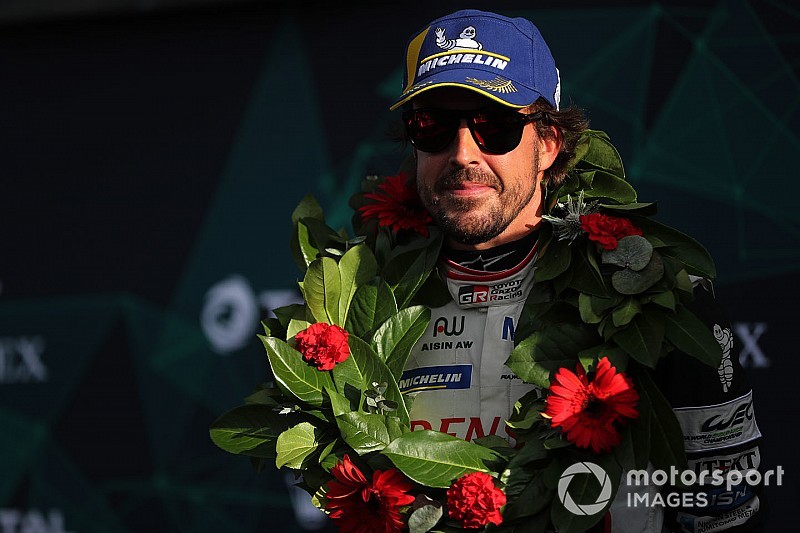 Fernando Alonso has vowed to return to the World Endurance Championship in the wake of his decision to stand down from the Toyota's line-up for the 2019/20 season.

The two-time Formula 1 world champion stated in his first interview after the confirmation of his replacement by Brendon Hartley for next season that he was "only taking a short break from the series".

Speaking at Spa ahead of this weekend's penultimate round of the 2018/19 superseason, he said: "In the medium term and long term, 100 percent I will come back to WEC, because it is a series I really enjoy.

"I like the type of racing here, I like the unpredictably of the racing with all the traffic and I like the team spirit of sharing a car with teammates."

Asked if Toyota would be his first choice of team when he decides to return to the WEC, the 2018 Le Mans 24 Hours winner replied: "Absolutely. This team is amazing — it is perfect in everything it does."

He stated in Wednesday's announcement of Toyota's 2019/20 WEC line-up that he expected to continue his relationship with Toyota, stressing that "there are many interesting opportunities to explore within Toyota Gazoo Racing"."

Alonso explained that he was stepping down from Toyota's WEC squad in order to leave himself free to take up other opportunities "not only with Toyota" that may arise for 2020.

"To commit to the new [WEC] season until June 2020 was closing [the door] on some of the opportunities that may come later in the year, so I took the decision to stop this programme for the moment, for the short term," he said.

"Being free of any obligations is the best way I could approach those opportunities — that is the reason why I could not commit [to Toyota] in May of this year."

Alonso didn't rule out a return to F1 next year or a full programme in the IndyCar Series following his second appearance at the Indy 500 this month.

Alonso once again raised the prospect of him competing in motorsport disciplines new to him following his completion of the second leg of the unofficial triple crown of motorsport with his Le Mans victory last year.

He said he had "two or three ideas in my mind" that would "continue this challenge of mastering different types of motorsport".

He wouldn't be drawn on the prospect of a 2020 Dakar Rally challenge after his test in Toyota Hilux rally-raid contender in March, saying only that it remains a "possibility".

Hartley will fill the vacancy at Toyota created by Alonso's departure, but the Japanese manufacturer has yet to confirm whether he will slot straight into his seat alongside Sebastian Buemi and Kazuki Nakajima.