Gaydon, 5 December 2013 - Aston Martin Racing works drivers, Jamie Campbell-Walter (GB) and Stuart Hall (GB) took the FIA World Endurance Championship (WEC) Trophy for GTE Am Drivers at the final round of the championship in Bahrain at the weekend (30 November).

Although it was their team-mates from the #95 sister car, Christoffer Nygaard (DN), Nicki Thiim (DN) and Kristian Poulsen (DN) who took the WEC GTE Am race win, Campbell-Walter and Hall finished in fifth place, securing them enough points to claim the championship that they had been leading for the final three rounds.

As well as taking the drivers’ title, Campbell-Walter and Hall’s Aston Martin Racing works team car, the #96 Vantage GTE, took second in the FIA Endurance Trophy for LMGTE AM Teams, a testament to the team’s hardwork and consistency throughout the season. 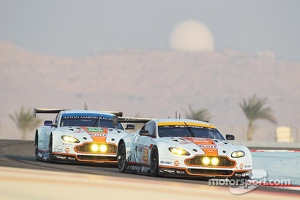 “I couldn’t ask for a better team than the guys at Aston Martin Racing,” comments Campbell-Walter. “I’ve worked with some of the best engineers I’ve ever experienced here and it’s given us the consistency and results to become world champions. Everyone in the team can class themselves a world champion too.”

Jamie won his first world championship title in 2000 when he took the FIA GT Championship. Since then, he has had a successful sportscar racing career, which includes a Spa 24 Hour win and taking the Autosport GT Driver of the Year Award.

“To be able to add the WEC Trophy for GTE Am Drivers to my list of achievements is a dream come true,” he concluded. “I’d like to thank everyone involved in helping me to get here.”

For team-mate Hall, who first raced with Aston Martin Racing in 2009, it was his first world championship win. He made his WEC debut at Silverstone 2012 and impressed the team by taking pole position for the start of the race, something he repeated at the first round of the 2013 season, once again held at Silverstone.

Since then, Hall and his Aston Martin team-mates have stood on the WEC podium four times, winning two races in São Paulo and Austin, and finished fourth in the 24 Hours of Le Mans. “It’s been an incredible year,” comments Hall. “Obviously, it’s had its highs and lows, but Jamie, Roald and I have been a fantastic team that has performed reliably at every round.”

The #96 Vantage GTE completed each of the eight rounds of the 2013 WEC, including the grueling Le Mans 24 Hour race, proving the cars reliability, the drivers’ ability and the teams’ delivery of a well-prepared car.

“To finish all rounds of an endurance championship is almost unheard of,” comments Hall. “The car hasn’t missed a beat all year and the team has been incredible.

“The last race was tough but we kept fighting to the end and it paid off. I always say that as long as you are in the race you can win the race and we never stopped believing we could do it. Jamie and I have to thank Roald for giving us this fantastic opportunity. Without him, we wouldn’t be world champions.”

Roald Goethe (DE), who owns the #96 car as well as competing in it, concludes: “I am thrilled for my team mates Stuart and Jamie to have clinched the drivers’ championship, and am equally thrilled to now have a car in the ROFGO Collection driven by two world champions and that came second in the teams' championship. All this was made possible by an exceptional team at Aston Martin Racing that gave us a car that ran faultlessly all year. What more could I wish for?!”