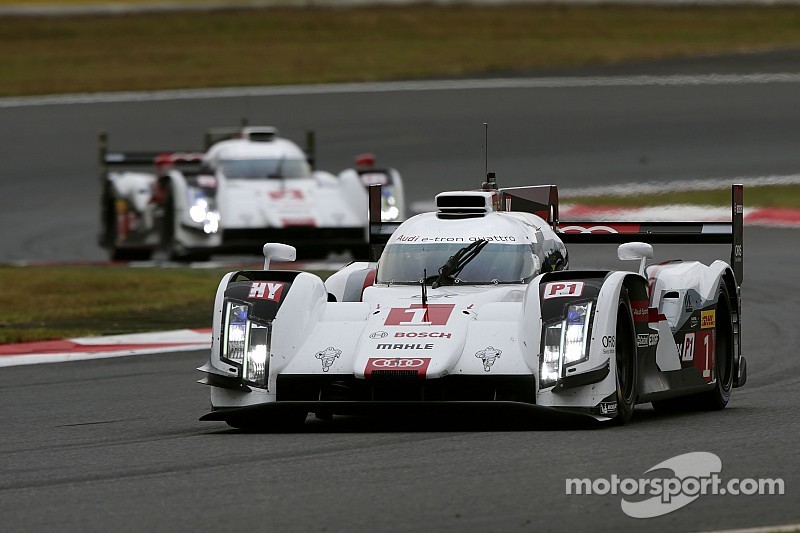 Ingolstadt/Fuji - Round five of the FIA World Endurance Championship marked the end of a superb string of results for Audi. Following two consecutive one-two victories and a total of five podium results since May, Audi Sport Team Joest had to settle for positions five and six at Fuji. As a result, the battle for the World Championship is intensifying as the lead of the standings has changed again three races before the end of the season. Audi, as the runner-up in the manufacturers classification, now trail Toyota by just 8 points, continues to maintain its challenge.

For the third time in succession, Audi is set on winning the WEC title. In pursuit of this aim, the squad from Ingolstadt and Neckarsulm scored 18 points in Japan in difficult conditions and remains within striking distance of the top. On the 4.563-kilometer circuit south-west of Tokyo that with its combination of a long start-finish straight and a narrow last sector that primarily rewards race cars with extremely powerful hybrid systems, Lucas di Grassi/Loïc Duval/Tom Kristensen (BR/F/DK) managed to improve from grid position six to fifth place. A well-balanced driving performance and a favorably timed third pit stop in a yellow period helped them to do so.

We didnt achieve what we intended to do, although essentially, we didnt drive a bad race.

With car number 2 Audi Sport Team Joest had opted for different tactics. Following a brilliant beginning of the race, André Lotterer tried to use his first set of tires a second time beyond the first refueling stop. But the team stopped this attempt early as the lap times did not remain sufficiently consistent. Consequently, the German pitted again after just 17 instead of 35 laps which saved him an additional stop, however. The tires of the hybrid sports car kept picking up rubber from the track on lapping other participants, which caused the lap times to increase.

In spite of this, Audi scored 18 valuable points in the manufacturers classification on a track that did not suit the R18 e-tron quattro well. In three weeks from now, on November 2, the sixth race of the season will be on the calendar at Shanghai (China). On its largest single market, Audi achieved its sixth WEC victory of the season last year.

Quotes after the race

Dr. Wolfgang Ullrich (Head of Audi Motorsport): Congratulations to Toyota on victory in their home round. We managed a case of damage limitation in Japan because we continue to be in a promising position in the manufacturers world championship. It was foreseeable that wed be having a difficult time at Fuji. Still, our two driver squads and the whole team were not unsettled by this and scored valuable points for us in Japan.

Chris Reinke (Head of LMP): Our squad showed a flawless performance  that applies to the team as well as to our drivers. We used different tactics with both cars in order to maintain our chances. In the end, this earned us 18 points that will still be very important in the battle for the title.

Ralf Jüttner (Team Director Audi Sport Team Joest): The positive thing about the race was that we made no mistakes. Strategically, we tried everything and all the pit stops were superb. But, unfortunately, the pit stops were the only aspect in which we were quicker than the competition. We didnt manage to get the tires to work optimally. In the Championship, we relinquished the lead at this juncture. Now were planning to attack in the coming round at Shanghai and to recapture the lead.

Lucas di Grassi (Audi R18 e-tron quattro #1): We didnt achieve what we intended to do, although essentially, we didnt drive a bad race. We gave everything from the beginning, had a good strategy and good pit stops too. Now weve noticed that there are still a few things left to improve. But, its a fact that there are some race tracks on which youre less competitive than on others. We mustnt be disheartened now but have to be better again in the next race.

Loïc Duval (Audi R18 e-tron quattro #1): We tried everything today. Principally, theres nothing we can fault ourselves for because we made no mistakes and had no technical issues whatsoever. We simply werent fast enough. But thats how racing is at times. Weve got to analyze this and improve before the next race.

Tom Kristensen (Audi R18 e-tron quattro #1): Congratulations to Toyota on their deserved victory. We traveled to Japan with great expectations. We were aiming to reward our numerous fans here with a nice result. But our love for Japan is equaled by the challenge for us to prevail at Fuji International Circuit.

Marcel Fässler (Audi R18 e-tron quattro #2): It was a difficult race for us because we werent able to keep the pace. On my first stint, it was very difficult to get into a reasonable rhythm. Somehow I didnt find the balance. Fortunately, the car clearly felt better later in the race. But on the whole Im not satisfied. We need to analyze the entire weekend, look ahead and strike back at Shanghai.

André Lotterer (Audi R18 e-tron quattro #2): Its not a great result. Positions five and six are very unusual for us. Weve got to face the fact that we didnt have the potential this weekend. We did everything correctly in the race in every respect. Were going to learn our lessons from this and try and improve. The Championship remains open.

Benoît Tréluyer (Audi R18 e-tron quattro #2): It was a difficult race. Today, we werent fast enough for a place on the podium. We simply lost too much time to the competition in several places. But thats racing. Weve got to improve in order to be in contention at the front on a track configuration like this one as well. Now the preparation for the next race begins.