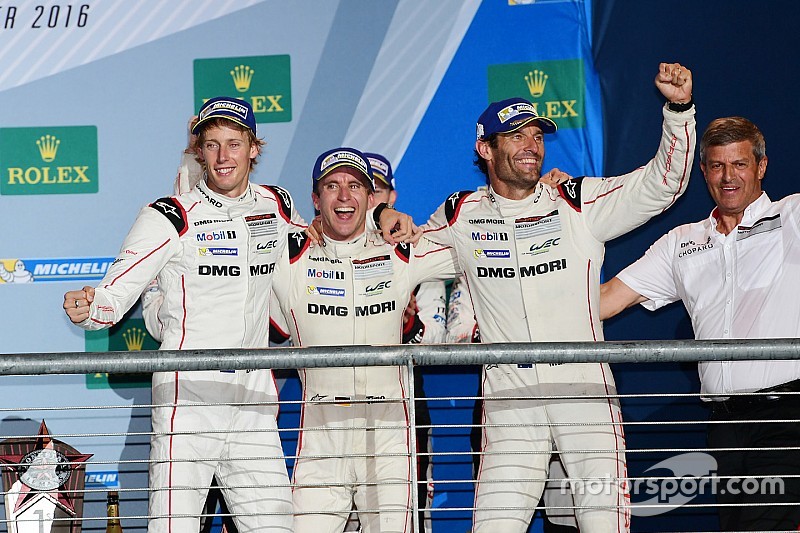 The Porsche 919 of reigning champions Mark Webber, Brendon Hartley and Timo Bernhard scored its third FIA World Endurance Championship victory on the trot in the 6 Hours of COTA – a race Audi will feel it should have won.

Audi dominated the opening stages, although Webber (who started on used tyres) briefly split them on the first lap. It converted a 1-2 front row lock out to a convincing race performance in the daylight hours, but Audi’s chances completely unravelled after sunset.

The duel between Audi and Porsche turned on its head with two hours remaining, as a collision between the #44 Manor Oreca LMP2 and #66 Ford GT in the Esses produced a perfectly-timed full-course yellow for the #1 Porsche.

The #7 Audi of Andre Lotterer, Marcel Fassler and Benoit Treluyer – which had previously held a lead of almost a minute – had already made its pitstop before the yellow. The #1 Porsche thus gained a ‘free’ stop under the caution, and leapfrogged into an unlikely lead of 18s.

As the #7 attempted to fight back, Treluyer clipped the #66 Ford GT of Olivier Pla in the fast right-hander at Turn 18 – the very same car that had cost him the lead in the first place.

“The Ford pushed me out, I’m stuck in the gravel,” Treluyer complained. Pla argued: “There was nothing I could do to avoid that.”

The #8 sister Audi had earlier been leading convincingly, but an electrical failure exiting Turn 1 stranded Loic Duval for about 50s while he recycled the system.

The car fell back behind the strongest Toyota – the #6 of Kamui Kobayashi, Mike Conway and Stephane Sarrazin – and the #8 required two pitstops under full-course yellow when the driver’s door wouldn’t close properly.

A charging penultimate stint from Lucas di Grassi put the #8 Audi back in contention for second, and took the place from the Toyota in the final pitstops. But he was 20s behind the #1 Porsche, which stroked home in Bernhard’s hands to a third successive win.

The points-leading #2 Porsche finished a lacklustre fourth, by its lofty standards, delayed when Neel Jani suffered a puncture and also suffered aerodynamic issues.

The #5 Toyota was a distant fifth, Sebastian Buemi suffering a left-rear puncture plus a wastegate issue that hampered its power output. It was also given a 5s pitstop penalty for overtaking using track limits.

Rebellion won the non-hybrid LMP1 class, ahead of the ByKolles CLM.

The main battle here was for second between the #43 RGR Sport by Morand Ligier and #26 G-Drive Oreca. The latter had to start from the back of the grid, but charging stints by Alex Brundle and Rene Rast took the fight to the Mexico City-winning car but just fell short.

In GTE Pro, the #95 Aston Martin of Marco Sorensen and Nicki Thiim dominated from start to finish, ahead of the AF Corse Ferraris of Gianmaria Bruni/James Calado and Davide Rigon/Sam Bird.

Sorensen revealed he lost radio contact with the pits in the penultimate stint, and only knew when to pit when the fuel alarm went off.

It was a similar story of Aston domination in GTE Am, as although it lost the lead on the opening lap and dropped to fourth, the #98 Vantage V8 of Paul Dalla Lana, Pedro Lamy and Mathias Lauda would not be denied victory – despite a late spin for Dalla Lana at Turn 8.

“It’s tough out there – you’re tired and it’s dark,” he explained.