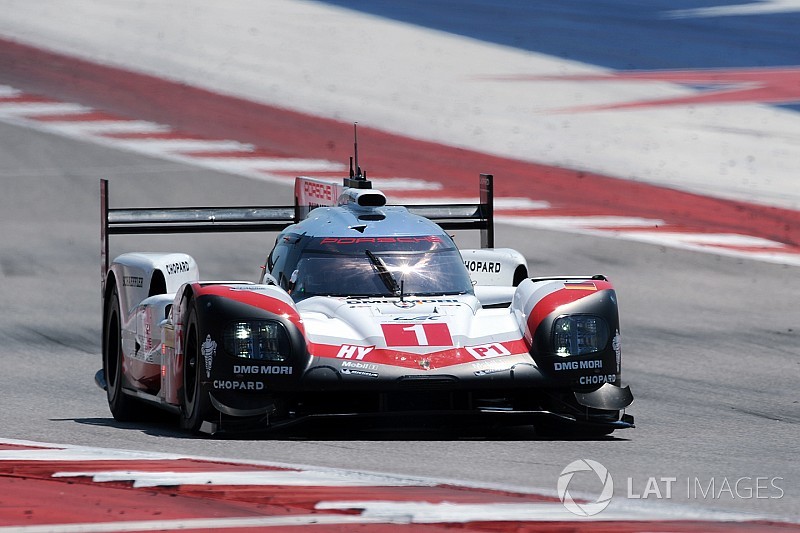 Porsche monopolised the top positions in both Thursday free practice sessions for the Austin round of the FIA World Endurance Championship.

The German manufacturer's pair of 919 Hybrids shared the honours across the two practice periods: Earl Bamber went fastest aboard the #2 car in FP1 and Neel Jani topped the times in the #1 Porsche in the second of the 90-minute sessions.

Bamber led the way with a 1m48.124s in the opening session before the times tumbled in FP2.

The fastest of the Toyota TS050 Hybrids ended up nearly a second off the pace on a 1m46.819s from Kamui Kobayashi set in the second session.

The two Rebellion Oreca 07s jumped to the top of the LMP2 times midway through the second session.

Bruno Senna ended up fastest on a 1m54.601s, which put him just under three tenths up on Mathias Beche in the sister car.

Nicki Thiim set the pace in GTE Pro for Aston Martin, his 2m04.023s second-session best putting him just seven hundredths up on Harry Tincknell in the best of the Ganassi Ford GTs.

The two Fords had been quickest in the opening session, Stefan Mucke ending up two tenths clear off Andy Priaulx.

Pedro Lamy was quickest in GTE Am for Aston Martin in both sessions.

WEC will return to Silverstone in 2018/19, hints Neveu