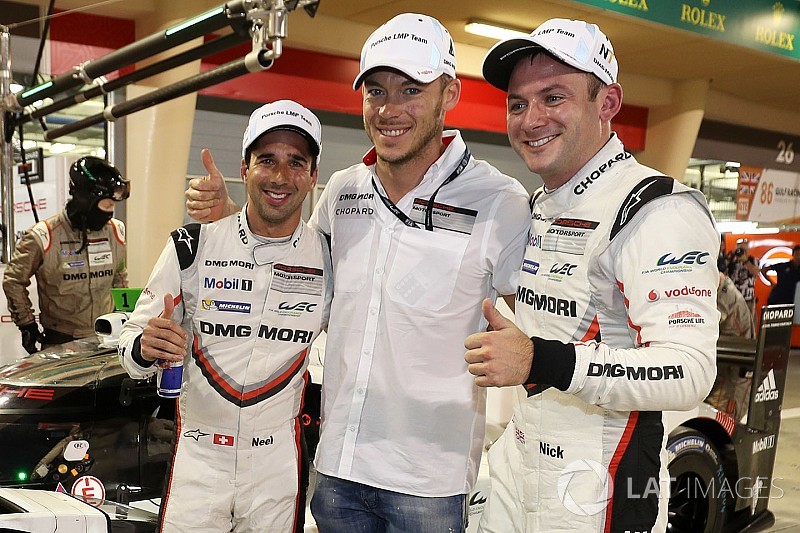 Nick Tandy and Neel Jani claimed a final FIA World Endurance Championship pole position for Porsche before it bows out of LMP1 after this weekend's Bahrain round.

The drivers of the #1 Porsche 919 Hybrid beat the best of the Toyotas to the top of the timesheets by nearly three tenths of a second.

Tandy had trailed Mike Conway in the #7 Toyota TS050 Hybrid by more than a second in the first runs after making a mistake on his lap.

Jani then posted the fastest time of the session with a 1m39.084s, which prompted Porsche to send Tandy back out for a second run.

Jose Maria Lopez was nearly seven tenths slower than Jani, which left the #7 Toyota in second with a 1m39.646s average.

Tandy said: "It was Neel's lap that made us think let's go for pole — when I saw 39.0, I thought wow. What a great result for a our last weekend."

Brendon Hartley and Timo Bernhard took third place with a 1m40.011s average, while Kazuki Nakajima and Anthony Davidson were fourth in the Toyota that has won the past two WEC rounds.

Negrao was second fastest after the first runs aboard the French team's Oreca-Gibson 07 while Menezes lapped within three tenths of his team-mate's time.

That consistency gave them a 1m47.227s average and pole by fourth tenths.

Ho-Pin Tung struggled in the best of the Jackie Chan DC Racing Orecas on the first runs, but Thomas Laurent was able to leapfrog the car up to second after setting the quickest lap of the second batch of drivers.

Their average of 1m47.612s put them just over a tenth up on the championship-leading Rebellion Oreca qualified by Bruno Senna and Julien Canal.

Ferrari on pole for GTE decider

Rigon posted the fastest time in class witha 1m56.021s in the first runs and then Bird was only a couple of hundredths slower as they ended up on a 1m59.033s average aboard the #71 Ferrari 488 GTE.

That put them three tenths up on Aston Martin duo Darren Turner and Jonny Adam, who claimed second position with a 1m56.372s average.

Ford's Andy Priaulx and Harry Tincknell were the highest-placed pairing with a realistic chance of taking the title in third place.

Their average in the #67 Ganassi Ford GT ended up on a 1m56.463s average, which put them four tenths up on points leaders James Calado and Alessandro Pier Guidi in the #51 Ferrari.

Frederic Makowiecki and Richard Lietz, who lie second in the points, were only sixth fastest in their factory Porsche 911 RSR.

Pedro Lamy and Paul Dalla Lana took a seventh GTE Am class pole of the season in their Aston Martin Vantage GTE.