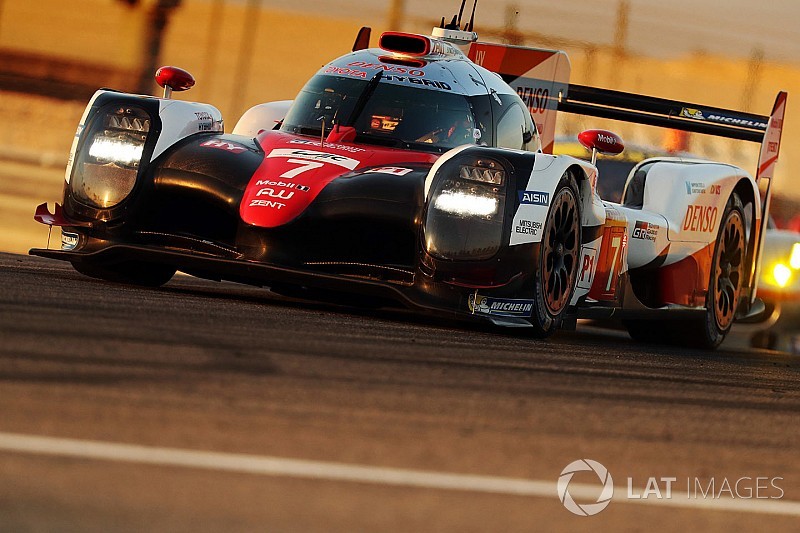 Toyota led the way in the opening practice session of the Bahrain FIA World Endurance Championship season finale, which was interrupted by a lengthy stoppage for an oil spill.

The 90-minute afternoon session was brought to a halt with 59 minutes remaining, when the #67 Ford GT of Harry Tincknell suffered an oil leak, eventually coming to a halt at Turn 5.

It took 36 minutes for the track to be cleaned for the session to resume, at which point it was decided to extend the session by a further half-hour to make up for the lost running.

The two Porsche 919 Hybrids were third and fourth, with Neel Jani putting the #1 third with a 1m42.647s ahead of Timo Bernhard in the title-winning #2 car.

The points-leading #31 Rebellion entry was slowest in class, almost two seconds slower than the sister car.

In GTE Pro, a 1m58.579s from championship leader Alessandro Pier Guidi put the #51 AF Corse Ferrari on top by just over three tenths from the best of the Aston Martins, the #97 of Jonathan Adam.

After its oil leak, the #67 Ganassi-run Ford GT recovered to take third in class with Tincknell at the wheel, helped by the session being extended.

In fifth was the best of the Porsches was the #91 of Richard Lietz, who along with Frederic Makowiecki lies just two points behind Pier Guidi and James Calado in the race for the GTE Pro drivers' title.

Porsche topped the GTE Am division courtesy of Matteo Cairoli, who set a best time of 2m00.428s in the #77 Dempsey Proton car.