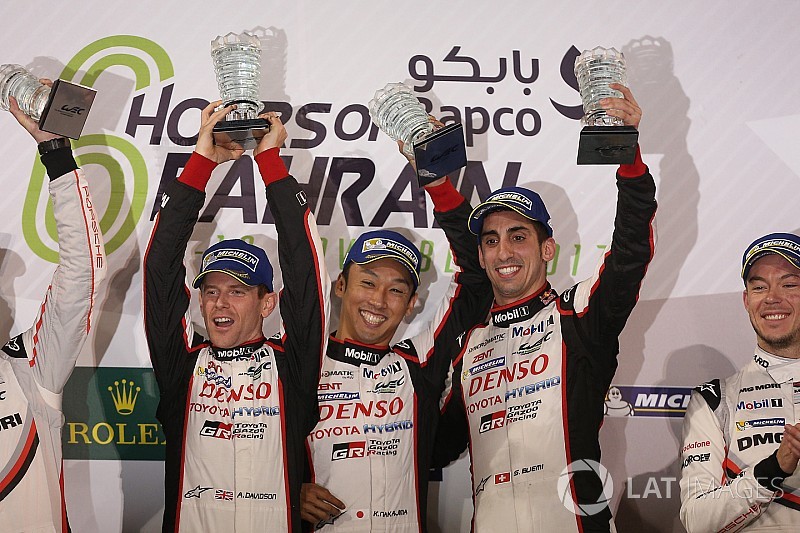 Toyota scored victory in the final FIA World Endurance Championship race of the season in Bahrain, as Ferrari sealed the GTE drivers' crown with a 1-2 finish in class.

Sebastien Buemi, Kazuki Nakajima and Anthony Davidson took their fifth win of the year and their third in succession on virtue of having the only incident-free race of the four LMP1 hybrids.

In its final LMP1 race, Porsche got both of its cars on the podium, with the championship-winning #2 919 Hybrid of Timo Bernhard, Earl Bamber and Brendon Hartley ending up a lap down at the finish.

The #2 crew's victory hopes were dashed when they had to make an unscheduled pitstop after just seven laps as a bollard got wedged under its front bodywork, costing a minute and 20 seconds.

Next to drop out of contention was the #7 Toyota TS050 Hybrid, when Kamui Kobayashi made contact with the #92 Porsche of Michael Christensen at Turn 2 at the end of the third hour.

The contact was heavy enough to put the Porsche out of the race, while the Toyota lost two laps with a visit to the garage for repairs and was later hit with a stop-and-go penalty.

An hour later, Nick Tandy suffered similar misfortune in the #1 Porsche as he tried to lap the #86 Gulf Racing Porsche car, just having taken the lead from the #8 Toyota by moving on to alternate strategy.

The collision resulted in a slow tour back to the pits and the loss of a lap, and in the end Tandy, Neel Jani and Andre Lotterer had to be content with third, 46 seconds behind the #2 car,

Kobayashi, Mike Conway and Jose Maria Lopez made it to the finish in fourth in the #7 Toyota, two laps down.

Ho-Pin Tung, Oliver Jarvis and Thomas Laurent enjoyed a lead as big as 50 seconds at one stage in the #38 DC Racing Oreca but the #31 Rebellion was able to make significant inroads in the final two hours, despite Senna reporting a power steering problem.

Both DC Racing and Rebellion had to make late splashes in the final half-hour, but the former had taken a full service at the penultimate stop as Tung handed over to Jarvis, while Senna stayed on board for a triple-stint at the end of the race.

That gave the #31 crew an advantage of some 25 seconds when Senna emerged from the pits for his last stop, shortly after Jarvis had to stop again due to a fuel pick-up issue.

While Jarvis was able to close the gap to Senna on fresher rubber, the Brazilian held on by 10 seconds to claim the win and the title.

Ferrari sealed the GTE Pro drivers' crown as Sam Bird and Davide Rigon took the class victory in the #71 AF Corse car in a staged finish.

The #71 pair controlled the opening two hours of the race, but dropped back around the halfway mark when excessive tyre wear prompted a change in strategy.

That allowed the sister #51 car of James Calado and Alessandro Pier Guidi into a healthy lead, but in the final 15 minutes Calado was ordered to slow and hand the advantage to Bird.

The two cars finished 0.174s apart, but second was still enough for Calado and Pier Guidi to take the drivers' title.

After dropping 30 seconds with a slow pitstop, Ford's Andy Priaulx passed the #91 Porsche of Frederic Makowiecki in the final 15 minutes to secure the final place on the podium for himself and Harry Tincknell.

The best of the Aston Martins, the #97 of Darren Turner and Jonathan Adam, was sixth on the swan song for the current-model Vantage GTE.

The GTE Am title was sealed by the #98 Aston Martin trio of Pedro Lamy, Mathias Lauda and Paul Dalla Lana, who romped to a fourth victory of the season in dominant style.

Their nearest rivals, the #77 Dempsey Proton Porsche crew, lost any chance of contending for the crown when they had to spend several minutes in the garage early on, and eventually finished fourth.