In keeping with his new title of ELMS Champion, earned from a podium at Petit Le Mans, Mathias Beche won the LM P2 class at the 6 Hours of Shanghai final of the World Endurance Championship 2012. 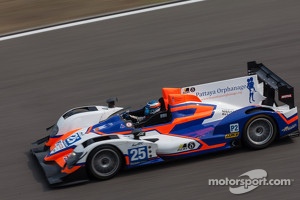 Closing this round of the WEC, the young Swiss driver joined the british Team ADR-World Endurance ChampionshipDelta driving a Oreca 03-Nissan with John Martin and Tor Graves. With only a dozen laps in the dry during Free Practice 1 and 2, difficult weather conditions during Session 3 and a warm-up that was canceled, Mathias actually only discovered his car during his first stint of the race! Rapidly finding a good rhythm, the ELMS 2012 Champion was yet again proving his speed and consistency, which eventually ended with fastest lap of LMP2 class. For his return to the Asian continent where he began his career in single-seaters back in 2006, Mathias Beche again marked the occasion by winning the final round of the World Championship calendar. A victory that completed a season rich in success during 2012.

Mathias Beche (Oreca 03-Nissan n°25 | ADR-Delta): "It's just great to end the season as it began, with a victory! It was a very interesting weekend and insightful. I could see a different way of working with Team ADR Delta and I thank them for the confidence they have placed in me. This is a very professional team, work to detail and with a strong focus on performance. How they work diverges in some way from what I had experienced before. Even if the car remains the same as I've driven on paper, it is on many levels very different and I had to adapt slightly the way I drive. Thank you to my two teammates John Martin and Tor Graves, who both did a remarkable job. John only just missed taking pole, we won and I managed to bring home the fastest lap, so all in all a perfect weekend! I also re-discovered the WEC (World Endurance Championship) a magnificent championship again with a very high level in LM P2 - a positive end to a very positive year!”

Paolo Ruberti's balance at the end of the 2012 season