Having taken pole position for the opening round of the new World Endurance Championship, Benoît Tréluyer and his team-mates were unable to fight for victory in Saturday’s 12 Hours of Sebring following a mid-race shifting issue. Despite the 2011 Le Mans 24 Hours winners’ disappointment, they were able to celebrate the one-two finish achieved by their fellow factory Audis at the Florida circuit. 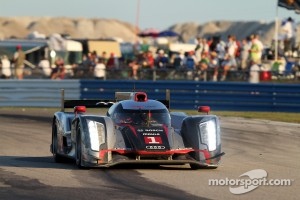 The #1 car of Tréluyer, André Lotterer and Marcel Fässler undoubtedly had the potential to climb the top step of the podium at the American classic’s 60th running.

After Lotterer snatched pole position in qualifying the trio looked a genuine threat to the #2 effort of Tom Kristensen, Dindo Capello and Allan McNish, but as the race hit mid-distance a small electronic issue began to affect downshifts, hindering the Audi R18’s progress.

“The problem began during my stint so I informed the team that something was wrong and headed for the pits,” explained Tréluyer. “Unfortunately, in the rush, the crew member in charge of the fire extinguisher did not have time to get ready and we received a penalty, costing us a whole lap!”

This proved a significant handicap, albeit one that would have little bearing on the eventual outcome of the race as Fässler encountered the same problem his team-mate suffered.

“At this stage we had to take the car back to the paddock and change some components,” explained Tréluyer. “When we re-joined our rhythm was good. We were running at a pace that would have allowed us to fight for the win, but with 17 laps lost it was too little too late. Luck just wasn’t on our side today.”

It was a frustrating end to the day for the 2011 Le Mans 24 Hours-winning crew, who appeared to have a few aces up their sleeve for the decisive latter stages of the race.

“We were looking good,” commented the Frenchman. “We dealt with traffic and avoided contact on what was an extremely busy circuit. The objective was to remain on the lead lap so as to launch an attack during the last hour of the race. We wanted to see how things played out towards the end and replay last year’s Le Mans script! Unfortunately, circumstances did not allow us to keep to that strategy. The car was good, we were comfortable and all was going to plan until the technical issue crept in.”

The problem came as a surprise to the #1 crew after a confidence boosting series of pre-race tests at the Sebring circuit.

“We were so comfortable that we didn’t think it necessary to participate in the final free practice session,” said Tréluyer. “The car was just that good. In qualifying, André did one flying lap and set pole; when we lost ground to traffic in the race we came back very strongly and kept heat in the tyres so as not to make any unforced errors.”

To avoid making contact with a single car for 12 hours of racing is a real challenge at Sebring – and one that Benoît, André and Marcel were able to successfully achieve.

“We managed to steer clear of the usual pitfalls,” concluded Tréluyer. “We’d never encountered this problem before, but that’s motor racing. We hit our targets and, personally, this is what I want to remember about the event. André, Marcel and I were making our 12 Hours of Sebring debuts and the experience we have gained is vital. We aim to come back next year and win.”