After taking nine victories at the Mount Fuji circuit over a decade spent competing in the Land of the Rising Sun, Benoît Tréluyer returns to the sacred mountain this weekend (October 14) for the penultimate FIA World Endurance Championship event of the season hunting win number 10. 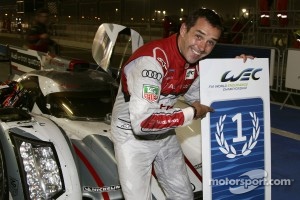 It has been almost a year since Benoît set foot in Japan and the Frenchman is hard pushed to recall when he last spent so long away from his adoptive homeland. “12 years ago, maybe,” says Tréluyer, who forged his racing reputation in the country thanks to countless victories and titles in Formula 3 (2001), Formula Nippon (2006) and Super GT (2008). Though the Alençon native now resides in the south of France, he has not forgotten the country that gave him his big break, nor the fans who adopted him as one of their own.

“I arrived in Tokyo on Monday morning,” explains Benoît. “I was so excited that I couldn’t sleep on the plane! I haven’t been here since last December and must admit that I missed Japan. At Narita airport, it was strange to have to go to the rental counter rather than having my own car waiting for me. I had the odd feeling of being away from home and yet somewhere very familiar.”

Benoît spent his day in the Japanese capital visiting friends who will not be at Sunday’s race, then headed for the city of Gotemba at the foot of sacred Mount Fuji.

“I lived in Gotemba for two years,” says Benoît. “I had a house there and got to know the place very well. On Tuesday evening I went to Mizuki, a teppanyaki restaurant where I used to eat regularly, which is about two hundred yards from my old home. The boss was never the talkative type, but when I walked in he put down his chopsticks to greet me and ask about my wife Melanie and my son Jules. It was an honour and I really appreciated the gesture. I was accompanied by André (Lotterer), my journalist friend Yumiko and her husband Iga'chan, who was my mechanic in Super GT.”

Though an old friendship unites Lotterer and Benoît, the pair rarely worked together in Japan. “Coming to Fuji with Andre is very different from the old days,” he smiles. “When I raced in Japan we drove for different teams and didn’t stay in the same hotels. Now we travel together and, as we both still have our own little tricks and shortcuts, we argue playfully while Marcel (Fässler) watches in amazement!”

The third member of the world championship-leading crew has never raced in Japan and is sampling his first experience of the country while his two team-mates act as eager tour guides.

“We’ve let him see our Japan and are delighted to do so,” says Benoît. “I've left so much of myself in this country that I still feel at home here. I think it is the same for André.”

As such Benoît is keen to share his visit with the Japanese fans who cheered him on during his Formula Nippon and Super GT days. “It is still fairly quiet at the moment, but there will be a lot of people at the circuit this weekend. The organisers are talking about 20,000 spectators, but I know there will be more. Obviously, with the F1 grand prix at Suzuka last week and MotoGP racing at Motegi this weekend, Japanese motorsport fans are very busy in October. That said I’m sure they will turn out in force and I am looking forward to the reunion.”

Before that, Benoît has had the chance to get back behind the wheel of his #1 Audi R18 e-tron quattro at the track on which he has triumphed nine times in single-seaters and GTs.

“I won the last race on the old circuit and the first on the new one so I have a good record here, even if it's not my favourite track in Japan. It is quite technical, with an extremely long straight that ends with a hairpin before three fast corners and then some slow turns. In our Audi, the braking for turn one is just incredible – I've never braked so late here! In fact, it took several attempts to forget my old marks. We completed a lot of work during the test session and all three of us got through what we needed to. We now have all day tomorrow for data analysis and to prepare ourselves fully for the weekend.”

The Japanese race will be vital for Benoît and his team-mates who currently lead the championship by 13.5 points from fellow Audi drivers Tom Kristensen and Allan McNish. With just two rounds left to run, Japan could be the scene of another great moment in Tréluyer’s career .