Suspension specialist BILSTEIN and the Aston Martin Racing works team have agreed to a new three-year technology partnership up until December, 31 2016. The agreement supports the new Aston Martin V8 Vantage GTE in the FIA World Endurance Championship (WEC), which apexes with the 24-hour race in Le Mans. The prime objective of the cooperation is the development and trial of the new 4-way BILSTEIN MDS motorsport suspension which will be outfitted on up to five Aston Martins competing in a total of eight endurance races. BILSTEIN already gave its official support to the British manufacturer at the 24-hour race at the Nürburgring in 2013 on the basis of many years of successful cooperation between the two companies as OEM technical partners.] 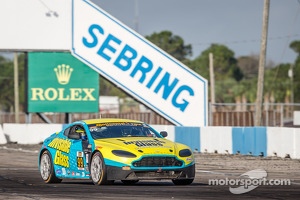 “After our first joint appearance at the 24-hour race at the Nürburgring in 2013, we are very proud that Aston Martin is now backing BILSTEIN’s further technological developments in the field of motorsport suspension in the long term on the international stage of professional endurance racing sport,” emphasizes Thorsten Schwippert, AfterMarket managing director with BILSTEIN. “Drivers are already benefitting from this collaboration through developments such as the active BILSTEIN DampTronic suspension, which is installed as a standard feature in all road models.” The new 4-way BILSTEIN MDS motorsport suspension is being used for development and trial purposes in the Aston Martin V8 Vantage GTE motorsport version painted in the iconic light blue, orange and white colors of the much praised Gulf brand.

With independent damping force adjustment now in one rebound and three compression stages and the even wider spectrum of individual adjustment options this produces, the new version of the modular damping system (MDS) from BILSTEIN provides all of the prerequisites for successful motorsport performance. Thanks to ten clearly discernible clicks from one (soft) to ten (tight), the high-performance damper system can be adjusted in the ideal manner to the demands of the various race tracks. Manufactured by hand in Ennepetal, the 4-way BILSTEIN MDS passed the first acid test with flying colors at the 24-hour race in Daytona, Florida where regular Aston Martin drivers Stefan Mücke and Darren Turner finished in eighth position in the GTLM Class in their 600 hp Vantage V8. “Our aim is to put our new developments through their paces under the hardest possible professional motorsport conditions,” explains Martin Flick, head of motorsport at BILSTEIN. “The technology partnership with Aston Martin Racing provides us with the ideal prerequisites for this.”

Aston Martin Racing will be receiving complete on-site support from BILSTEIN at the subsequent tests in Portimao (Portugal) at the end of February and Mugello (Italy) in March, as well as the FIA WEC 2014 races.