Both Toyota Hybrids will contest their home event in Fuji

After the 24 Hours of Le Mans, Toyota Racing elected to run just one of their TS030 Hybrids for the WEC events.

In a way this was expected that Toyota would contest their homeland race with both of their TS030 Hybrids. In early July the World Endurance Championship team shocked many of their fans, and the media when they announced that only the No. 8 Hybrid would contest the rest of the season.

They have announced that they will return the No. 7 car with drivers Kazuki Nakajima, Alex Wurz, and Nicolas Lapierre at the Six Hours of Fuji in October. The reason for running just one car was due to the preparing for the future regulations from both the ACO (Le Mans) and the WEC. They have been testing a new aerodynamics package.

At this time, the No. 8 car has arrived in the United States to take on challenge this weekend at the Circuit of The Americas in Austin, Texas. 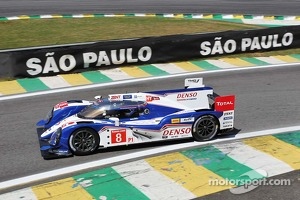 Anthony Davidson, Stephane Sarrazin, and Sebastien Buemi had a rough ending at the 6 Hours of Sao Paulo in Brazil when their Toyota TS030 Hybrid was taken out of the race early. Now the trio look forward to the WEC race on American soil.

The reason for the team to scale back to just one car was to test a new performance package in order to beat the Audis, and they were able to prove that they were moving in the right direction prior to the accident in Brazil.

“Our high-downforce package performed well in Brazil but we didn’t have the chance to see exactly how competitive we were in race conditions due to the accident. So this time we want to take the fight to Audi for the full six hours,” said Team President Yoshiaki Kinoshita.

They hope to have a far better weekend in Austin, Texas.

Davidson commented: “We had an extremely disappointing race in Brazil when we thought we had a genuine chance of victory so I am determined to have a better weekend in Austin. Our updated TS030 HYBRID felt really good at Interlagos which gives us confidence for this weekend.”

Lotus Praga LMP2 preview to the 6 Hours of Austin