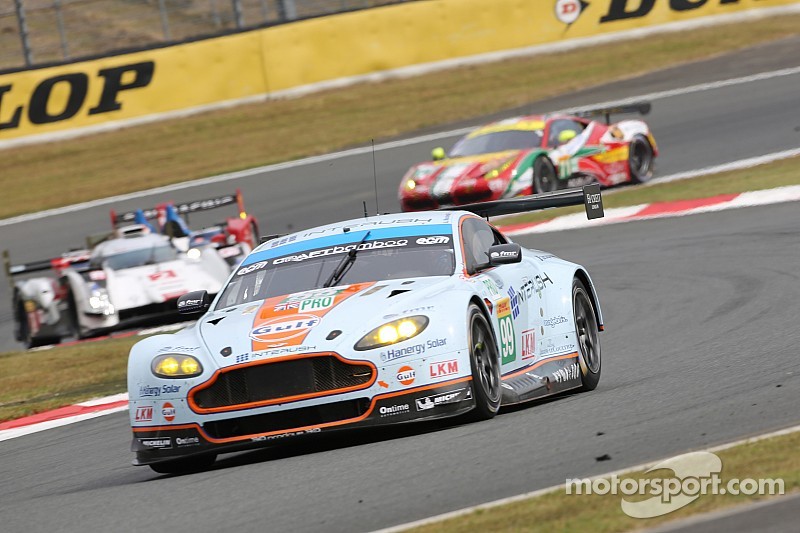 An incredible weekend of competition for all team.

Craft-Bamboo Racing has finished in third place in the FIA World Endurance Championship Six Hours of Fuji following an incredible weekend of competition from all three Aston Martin Racing drivers and the entire engineering and pit crew team.

Fernando Rees (BR) started the race in the #99 Interush-liveried Vantage GTE from pole position following a qualifying session yesterday, that saw the team record an average lap time almost half a second quicker than the identical second place car.

On the green flag, the Brazilian managed to keep the car out of trouble, despite the chaos around him, but forfeited a grid position in the process. Not one to give up a place without a fight, he put pressure on the #51 Ferrari of Bruni and, after just a few laps, caused him to run wide allowing Rees to regain the lead.

To take a WEC podium in just our fifth race as a new WEC team is incredible. Fernando has brought with him his WEC experience and knowledge and been a big influence on our progress...

“When you start from the front of the GTE Pro class you are in the thick of it,” commented Rees. “You have to make sure that you don’t get caught up in any of the chaos and I did that well. I lost a place to Bruni but quickly recovered it and we led the race for a long time.”

After an hour and 15 minutes, Rees handed the V8-powered machine over to Alex MacDowall (GB) who continued the team’s charge, now in third place.

With the team trying a new pit stop strategy the 23-year old was back in the lead when he handed the car back to Rees for his second stint.

“We really gave it everything we had today,” commented MacDowall. “We were consistently lapping faster than the 2013 WEC GTE Pro winners and we have to be pleased with that. The car felt great and the team did a fantastic job to give us what we needed to fight up at the front.”

Rees completed his second stint before handing the car to Darryl O’Young (HK) for his first racing laps of the weekend. Back in third place, O’Young began closing the gap on the Ferrari ahead while puling away from the Porsche behind, at times lapping as the fastest GTE Pro car on track. At the end of his stint he handed over to MacDowall who went on to cross the line in third place and take the team's first WEC podium.

“We decided to play a slightly different strategy,” commented O’Young. “We knew we were doing well with fuel and tyre management so left each stint a little longer in order to eliminate a pitstop towards the end of the race. It was a gamble but we did it and it enabled us to hold onto the podium position.

“To take a WEC podium in just our fifth race as a new WEC team is incredible. Fernando has brought with him his WEC experience and knowledge and been a big influence on our progress and Alex is learning so quickly. I’m excited for what is to come.

“However, we can’t let this go to our heads. We need to keep progressing in the right direction. We now know what we can do and we have to repeat it again in Shanghai.”