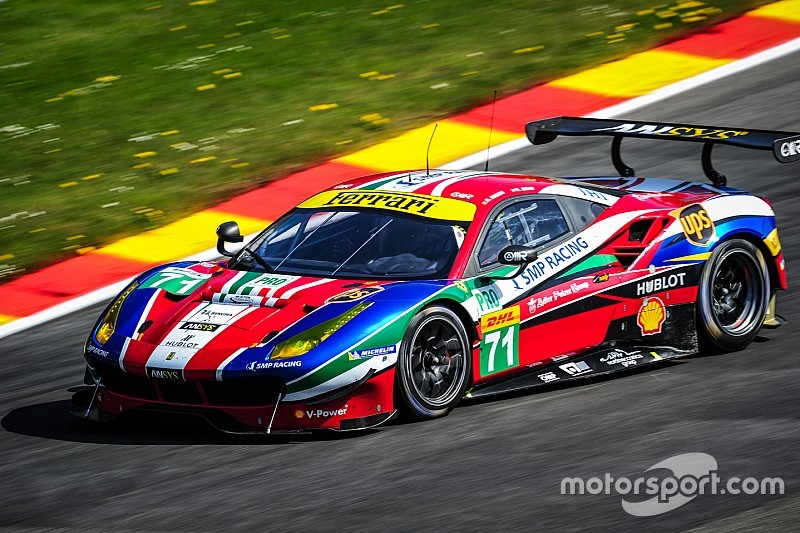 In GTE-Pro class Davide Rigon and Sam Bird on pole with car no. 71, Gianmaria "Gimmi" Bruni and James Calado second fastest with the no. 51

Francorchamps – The Ferrari 488 GTE monopolised the GTE-Pro class front row in qualifying for the 6 Hours of Spa-Francorchamps, which starts on Saturday at 2.30 pm. The crew of car no. 71 by AF Corse, Sam Bird and Davide Rigon, took a second consecutive pole, just over three tenths of a second ahead of teammates Gianmaria "Gimmi" Bruni and James Calado in the sister car no. 51. The 458 Italia of AF Corse team of François Perrodo, Rui Aguas and Emmanuel Collard, came second in the GTE-Am class.

The only Ferrari in the GTE-Am class, the 458 Italia AF Corse of Emmanuel Collard, François Perrodo and Rui Aguas, had a very positive session. Aguas and Perrodo took to the track with the Portuguese initially stopping the clock at 2:20:641, which he improved to 2:19:784 on his second lap. Meanwhile, Perrodo started with 2:22:547 before knocking a split second off that with 2:21:545 next time round. In the end the Ferrari no. 83 came second to the Aston Martin of Lamy-Lauda-Dalla Lana, but it will be a long race and the fight for first is wide open.

Audi on second and third rows at Spa