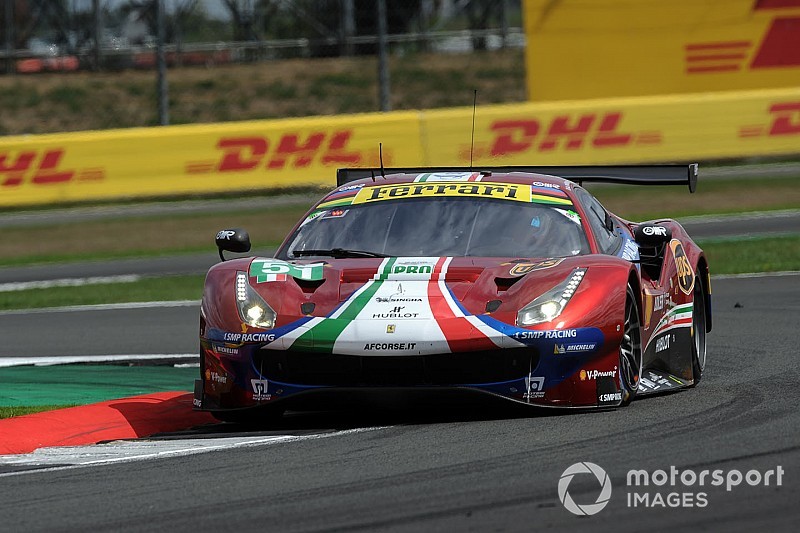 The reigning class champions took advantage of two full-course yellow periods and a safety car to work their way up the order in a race where they lacked the pace of rivals Ford and Porsche.

Calado was vocal about Ferrari’s inability to fight the pacesetters in the Le Mans 24 Hours, and when asked by Motorsport.com after his Silverstone win about the 488 GTE’s performance, he said more work must still be done to equalise the playing field.

“It’s lacking in straightline speed,” he said of the Ferrari. “In qualifying we tend to see [a deficit of] seven or eight km/h to the fastest guys.

“We struggled to pass the Am cars, which makes our racing really difficult. We do need more straightline speed. I’m hoping due to our lack of performance we should get something.”

Calado and Pier Guidi had qualified ninth of the 10 GTE Pro cars in the field at Silverstone, with an average time 1.3 seconds down on the pole-winning Ford GT.

The Briton revealed a wrong set-up choice had exacerbated matters, but said trying to take advantage of any full-course yellow periods had been Ferrari’s tactic from the outset.

“Going back to the briefing we did yesterday, it was a good couple of hours long and we got the set-up wrong yesterday,” he explained. “Obviously we rectified that, the car was handling fantastically.

“We knew on pace alone we’re not quick enough. So the plan was to save as much fuel as we could and try to get an advantage in terms of strategy, doing something different to the others. That paid off.

“Obviously we have to be realistic for Fuji and not expect the same thing, but hopefully we can get a good result there, because previously we’ve done well.”

Calado also insisted he wouldn’t allow any “stress” arising from the BoP situation detract from his victory.

“It doesn’t matter, I don’t really care,” he said. “We get stressed and frustrated [thinking about BoP], in times like this when we’re happy.

The #71 Ferrari of Davide Rigon and Sam Bird was also running strongly until it was involved in an incident with the #17 SMP Racing BR1 LMP1 car, giving the GTE Pro machine a puncture and severe bodywork damage.