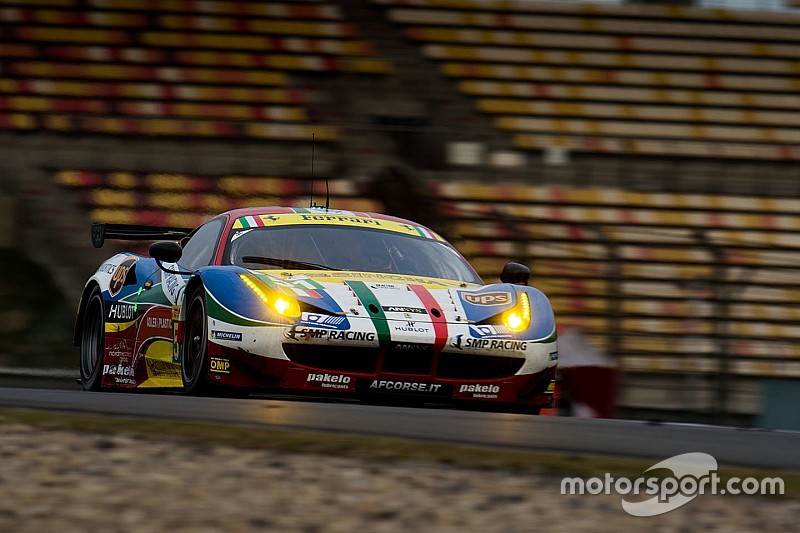 In GTE-Pro class pole position for "Gimmi" Bruni and Toni Vilander in the AF Corse no. 51 458 Italia. The no. 71 of Rigon and Calado takes second.

Shanghai, 31 October – Ferrari 458 Italias of AF Corse will have the entire front row to themselves in the 6 Hours of Shanghai penultimate round of the World Endurance Championship (WEC). The no. 51 of Gianmaria "Gimmi" Bruni and Toni Vilander is due to start the GTE-Pro on Sunday in pole, followed by teammates Davide Rigon and James Calado.

The two 458 Italias in the GT-Am enjoyed a less successful qualifying, with AF Corse no. 83 car of François Perrodo and Emmanuel Collard in fourth, ahead of SMP Racing no. 72 driven in qualifying by Aleksey Basov and Victor Shaytar.

The GTE-Pro qualifying kicked off with Toni Vilander and James Calado in Ferraris no. 51 and 71 of AF Corse. The drivers did a single timed lap each, recording respectively 2:02.500, first position, and 2:02.627, second. "Gimmi" Bruni and Davide Rigon then put on a spectacular show in the second part of the 20 minutes session. In fact, the driver of car no. 51 completed an almost perfect lap, finishing in 2:01.987, the first ever GT car to lap in under 2:02 in Shanghai.

The aggregate time was 2:02.243. Then Rigon clocked 2:02.390, which secured a second place for car no. 71 in a time of 2:02.508. Although the Ferraris enjoyed an extremely successful qualifying no one should be under any illusions about the race, which is long, highly demanding on cars and tyres and like the last race at Fuji, could very well be affected by rain at least in the early stages.

Victor Shaytar began with times of 2:06.519 and 2:05.540, before passing the baton to Aleksey Basov who stopped the clock at 2:05.750, which he reduced to 2:05.572 on his second lap (aggregate average time 2’05”556). Comeback specialist Andrea Bertolini will join the two Russians for the race itself. The overall pole position went to Mark Webber and Brendon Hartley (with Timo Bernhard) on the Porsche in 1:42.719. The 6 Hours of Shanghai will start on Sunday at 11 a.m. finishing at 5 p.m.