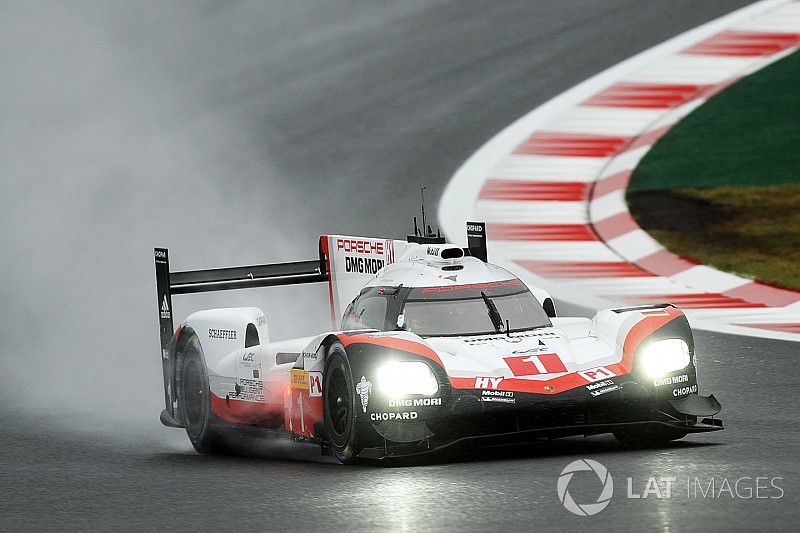 Porsche ended up fastest after a pair of wet free practice sessions for this weekend's Fuji round of the FIA World Endurance Championship.

The two Porsche 919 Hybrids set the best times of the day in the opening session in the hands of Andre Lotterer and Earl Bamber before a red flag and then heavy rain limited running in the second of the two 90-minute periods.

The best of the Toyota TS050 Hybrids was just under half a second back on a 1m35.738s from Jose Maria Lopez, with Sebastien Buemi a further tenth off in the second of the Japanese cars.

Lopez was at the top of the session-two times in the #7 Toyota on a 1m39.202s when it was red-flagged with 22 minutes on the clock after Vitaly Petrov went off in his Manor LMP2 Oreca-Gibson 07.

Barrier repairs and then an intensification of the rain prevented the session from restarting for nearly 45 minutes.

The #7 Toyota was the only LMP1 car to return to the track for the final 25 minutes of the session.

Alex Brundle was fastest on the day in LMP2 for the Jackie Chan DC Racing Oreca squad with a 1m42.735s. That put him just under half a second up on Matthieu Vaxiviere in the TDS Racing Oreca.

The second of the DC Racing Orecas was fastest in P2 in session two in the hands of Thomas Laurent on a 1m47.437s.

The two factory Porsches were quickest in GTE Pro with times set in the opening session.

Michael Christensen's 1m47.365s put him just over two tenths up on teammate Richard Lietz in the sister Porsche 911 RSR.

Davide Rigon was third-fastest in the best of the factory AF Corse Ferrari 488 GTEs, while Miguel Molina was only marginally slower on the way to topping the GTE Am times in his AF entry.

Ganassi Ford's Olivier Pla ended up fastest in GTE Pro in the afternoon session with a 1m52.658s.

Click here to see full results from both practice sessions