Greaves Motorsport ran one of their new Nissan powered Zytek Z11SN chassis for the first time in 2012 on the South Circuit at Silverstone. This particular car is destined to compete in the inaugural FIA World Endurance Championship and also at the Le Mans 24 Hours.

The initial laps of the test were driven by 2011 ELMS Champion, Tom Kimber-Smith, who checked out the systems and confirmed that everything was in order. Next into the cockpit was Elton Julian who will drive the car in the FIA WEC. After a couple of stints he handed the Nissan powered prototype over to one of his 2012 co-drivers, Ricardo Gonzalez. Ricardo also completed a ten lap stint, getting faster and faster as he familiarised himself with the power and handling of the LM P2 car.

The car is amazing to drive, compared to the LMPC car that we drove last year.

The team completed over 50 laps and the car ran faultlessly, a tribute to hard work and long hours put in by both Greaves Motorsport and Zytek to get the car ready on schedule.

Ricardo Gonzalez was bubbling with enthusiasm after his spell behind the wheel.
“It was great to finally meet the team and get behind the wheel of our car after a lot of anticipation. I was very impressed first of all by the team and the quality and detail of the work they’ve put into the car and the first class crew that they’ve put together, I have no doubt that we’ll be able to fight for the championship and for the win at Le Mans this year.”

“Driving the car for the first time was a great experience, both Elton and I were able to get up to speed right away and even though it’s a brand new chassis, it ran flawlessly throughout the whole day, which is a good sign, as we get ready for a full season of endurance racing where reliability is so important. The car is amazing to drive, compared to the LMPC car that we drove last year. The first thing you notice is just the grip and the downforce that the LM P2 car has, it’s extremely fast and the G-forces that you pull are substantially higher. I can’t wait to take the Zytek-Nissan out at Sebring and at all the other tracks that we are going to this year.” 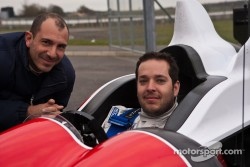 Elton Julian was also in an upbeat mood after the test.
“I’ve had a terrific first test today with the Greaves Motorsport and the LM P2 package. I really enjoyed the extra power and responsiveness over the LMPC car I’ve driven the last two seasons. The car ran flawlessly and the crew was calm and confident – the perfect British team, really – which also helped Ricardo’s introduction to Silverstone. It might as well have been my introduction as well, as the circuit’s changed so much since my F3 and F3000 days! I feel like we already have some positive momentum to take with us to Sebring a month from now.”

Greaves Motorsport’s Team Manager, Jacob Greaves commented.
“The test today went exactly to plan with all the drivers getting some laps in and the car running without a problem. We have a lot to do before the race next month in Florida but this is a good point to start from. We are really looking forward to the challenges in 2012.”