A Conversation with Jacob Greaves, Team Manager of Greaves Motorsport on the team's past and future.

Greaves Motorsport is rated highly in the business as one of the best non factory teams in endurance racing, can you explain why the team should enjoy such a good reputation? Our reliability record speaks for itself, you have to go back 24 race meetings, to 2009, to find our last retirement for a mechanical reason. 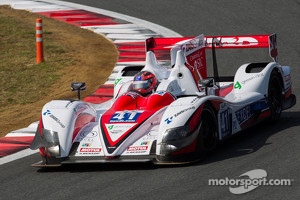 We have completed 219 hours of racing on track since our last non-finish and that was as a result of accident damage. Our cars are prepared for each race as if we are going to do the Le Mans 24 hours, no expense or effort is spared.

Our recruitment policy is find the best talent we can and then retain them, as continuity of personnel is a vital part of the drive for total reliability.

Matching this, I believe that the presentation of our cars and our garage is second to none, it is a reflection of our desire to be the best that we can possibly be.

Greaves Motorsport had a very busy 2012 season, what has the team been doing since the racing finished? It feels as if the season never really ended, as soon as the cars came back from China and the USA we completely rebuilt them.

These were our new chassis that were purchased early in 2012. We still have the Championship and Le Mans winning car from 2011. We did not race it last year as it was, frankly, a bit tired, as might be expected of a car that had raced at the Le Mans 24 Hours on five consecutive occasions.

We took the decision to upgrade that car to the latest specification, so now we have three 2013 cars that are ready to race.

However we did not just rebuild the cars, we have been looking very closely to see what improvements we might be able to make. In a collaboration with Zytek and a leading designer, we have explored a number of avenues that we believe will strengthen the overall package.

Any changes are only incremental as the ACO/FIA technical regulations are very strict, as is appropriate for a cost capped formula such as the LM P2 class.

We updated our CFD model to include all the data acquired during 2012 season and this gave us a few areas to focus on. The main aim was to improve the driveability of the car, as we believe if the drivers are comfortable behind the wheel, they will perform to higher and more consistent level, this is especially important in long distance races.

The other area that we focused attention on was reducing the drag in our Le Mans’ configuration.

Have the changes made during the off season been tested on track yet? Not yet, but we plan to have a private test in Aragon in early February before heading out to Sebring.

We had originally chosen Bahrain for the test since we have baseline set up data from last year’s FIA WEC race but the cost is prohibitive in the current economic climate.

Sebring, why are you racing at this ALMS event when your programme is the FIA World Endurance Championship and European Le Mans Series? The Sebring 12 Hours is recognised as one of the great events in motorsport and is the ideal platform for us to launch our 2013 season.

As others like Audi have proved, if you can go to Sebring and get a result it really means something. It is the best possible preparation for Le Mans.

How are the team’s plans progressing for the Florida Endurance Classic? We have been talking to many drivers and several are ready to sign up with us.

The biggest problem is the lack of competitors in LM P2. We are in discussion with the ALMS management and are trying to see if we can get other teams in Europe to join us.

I think the ALMS will be announcing some new proposals shortly. In any case we are committed to the race with one car but if the demand is there we have all three chassis available.

What are the final plans for the 2013 season? We have entered one car in the FIA WEC and one in the ELMS. We have entered both cars in the Le Mans 24 Hours, so a similar programme to 2012.

What are your views on the new ELMS format? Obviously everyone is nervous of the new ELMS championship. We have always been strongly in favour of a minimum of two stints per driver in each race.

Last year the budget for three drivers in a 6 hours race was just 15% more. The entry fees are only 20% less for half the race distance.

I think the ACO recognise this now and I am confident that for 2014 we will be back to 4 hours plus. We see this very much as a transition year while the series is rebuilt and we want to strongly support it.

Have you finalised your driver line up? We are not quite there yet, due to reduced sponsorship available this year we have to rely more on drivers with full budgets for most of the races. We are still looking for drivers with the appropriate funding.

Greaves 3D Engineering was launched in September last year. This is a new venture for the Greaves family and it provides state of the art CNC machining for ourselves and our customers.

We are also offering a range of pit lane and garage tools based on our own experiences. Both organisations are located at our new workshop facility at Yaxley, near Peterborough.

It has been a very busy time for our organisation, we are very much looking forward to going racing again .

Thank you for your time and good luck for 2013.

REBELLION Racing to contest ALMS, WEC and Le Mans in 2013