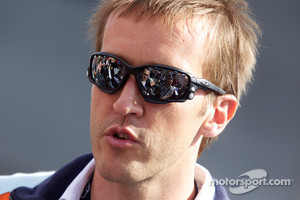 Rebellion Racing were one of the most successful LMP1 teams of 2011. The Swiss team won the 2011 Le Mans Series LMP1 Team Championship and the 2011 Le Mans Series Manufacturers Championship for Lola and Toyota. In the Intercontinental Le Mans Cup, Rebellion Racing ended the season in third place in the teams classification and as the best privateer team behind the Peugeot and Audi factory teams.

2011 also saw a strong outing for Rebellion Racing in the prestigious Le Mans 24 Hours; recording a 6th place overall finish which was the highest placed finish for a petrol LMP.

Bart Hayden, Rebellion Racing Team manager commented; "We are very pleased to welcome Harold on-board, he will bring a great deal of experience to the team and will help complete a strong driver line-up for 2012.”

Harold Primat commented; “I am very happy to be joining Rebellion Racing for 2012. They are a privateer team with an extremely impressive racing record and I am excited to be competing in the new FIA World Endurance Championship with them this year. 2012 will be my seventh year in LMP1 racing. I would like to thank Aston Martin Racing for a fantastic three years and now I am looking forward to this next chapter in my racing career.”

“Last but not least, I would like to express my full appreciation to my partners for their continuing support this year; Harwood International, Banque Baring Brothers Sturdza, Crans Montana and Primland;” continued Harold Primat.

How Verstappen and Hamilton are viewing the F1 title run-in