JRM Racing takes on yet another challenge this weekend as it travels to Brazil for the fifth event on the 2012 calendar, the Six Hours of Sao Paulo on 15 September. The Sussex-based squad will enter the LMP1 class with a Honda HPD-ARX 03a with David Brabham, Karun Chandhok and Peter Dumbreck on driving duties. 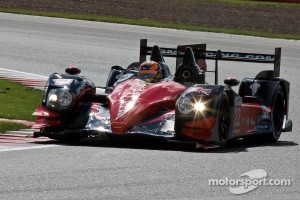 Coming just three weeks after the team’s home race at Silverstone, the Brazilian round will be another opportunity for the team to show its mettle as it takes on the established teams competing in the LMP1 category. Despite 2012 being its debut year in the FIA World Endurance Championship, JRM ran in the top five for a large part of the Silverstone race and ultimately finished in seventh overall.

Currently third in the standings, the team now goes to Sao Paulo eager to put together a complete, clean weekend to regain ground in the championship.

Team principal, James Rumsey, said, ‘We made a big step forward in Silverstone. After starting the season with very little time in hand before the first race, we went to the British round confident in our preparation and our ultimate performance. We had conducted a test beforehand, run in the simulator and the technical team was therefore able to hit the ground running. Our relative race pace compared to the much more experienced teams around us was good, so putting everything we’ve learnt into practice and having a clean weekend in Brazil is definitely the aim this weekend.’

Team manager and chief engineer, Nigel Stepney, describes the task facing the team this weekend. ‘Interlagos is a very different challenge from Silverstone. The track is very narrow, bumpy and quite ‘green’. The location at over 800m in altitude means the car will also produce around 5% less power so the car behaviour will feel very different from the rest of the season.

‘One of the key elements on our run plans will be to understand the tyre degradation. Getting the tyres to last for around 80 laps, particularly with the high temperatures expected on race day (around 30 deg C) will be quite tricky. Furthermore there are huge physical pressures on the drivers – the track is run anti-clockwise so it stresses the neck muscles in ways that they aren’t usually subject to. Each driver will have to do well over a Grand Prix distance each, which isn’t going to be easy in those high temperatures on race day.

‘We are however pretty confident we can take these challenges in our stride. Our main aim is to finish ahead of the two Rebellion cars and as the highest-classified privateer team.’

Peter Dumbreck hopes his experience of the track will stand the team in good stead this weekend as it sets about this aim. ‘Interlagos is another new challenge with the Honda HPD LMP1 car, although I have the benefit of having raced here two years ago in GT1 with Sumo Power. It's one of the few circuits that goes anti-clockwise so will be quite physically demanding. It's also quite a tight, narrow circuit compared to the other tracks we visit this year. This will make overtaking GT and LMP2 cars in the middle sector very difficult. Although there are fewer cars on circuit than the last couple of rounds of WEC it will be a very busy lap as the track length is less than 2.7 miles. It's a great track to drive, one with big elevation changes, and corners with very banked camber that the television pictures don't do justice.’

David Brabham last visited the track in his F1 days and can’t wait to get started in Thursday’s practice sessions. ‘I am really looking forward to getting out on the track again, as the last time I was here was in the 1994 Grand Prix. The track hasn't changed a great deal since then, but the history and atmosphere here is great. The JRM team has kept working hard to close the gap to our competitors, who have more experience than we do, but the gap is closing. I do expect a close race here because it is a small track and times will be closer here than other places.’

Karun Chandhok echoed his team-mates’ thoughts. ‘I'm very excited about racing here in Brazil for the first time! I came here last year as the reserve driver for Team Lotus and did lots of laps on my bike but never got a chance to drive around Interlagos. I love coming to the older circuits with a lot of character and this certainly is one of them. The layout and elevation changes look very interesting. The circuit is one of the few that is pretty much unchanged from when I first watched my all time idol Alain Prost win the 1990 Brazilian Grand Prix on TV and I can't wait to get out on track. It's a lot narrower than Silverstone, Le Mans or Spa so getting through the traffic quickly is going to be very tricky. There isn't really a rest for the drivers around here and we expect to be doing over a 100 laps each on race day so it will be a real physical challenge as well.’