Kamui Kobayashi has explained the tyre calls that led to he and his teammates in the #7 Toyota taking their first FIA World Endurance Championship of the season at Fuji.

With the race starting in wet conditions, the #7 and #8 Toyotas went for diverging tyre choices, but Kobayashi came into the pits after just 10 laps to switch to the same extreme wets that Kazuki Nakajima was using on the sister car.

That meant that the #7 car took the advantage as the safety car was deployed after 30 minutes when the MR Racing Ferrari suffered a puncture and covered the track with debris, which eliminated the early lead built by Nakajima.

Kobayashi gained further ground when he switched directly from full wets to slicks after the caution period, while Nakajima stayed out on intermediates before moving to dry tyres a few laps later.

From there, the car shared by Kobayashi, Mike Conway and Jose Maria Lopez held an edge over the #8 car of Nakajima, Sebastien Buemi and Fernando Alonso, with the #7 crew clinching their first win of the season.

“We had to start from P8 and we had to have a take some risks on the strategy; that is why we didn’t take the extreme wet tyre, and we were struggling to warm them up,” said Kobayashi.

“After the second lap we only had the same speed as the privateers, so we decided to change to the same [compound] as car #8, and straight away our laptimes were quite good.

“We decided to jump on to dry tyres and we gained a lot of positions and gap during the safety car.”

Conway took over from Kobayashi for the middle part of the race and was able to extend the #7 car’s lead advantage.

“It was tricky because at points we were on the new tyre and they were on the old, and vice versa,” said Conway. “When Fernando jumped in [the #8] he was on the new [tyre].

“It was hard, but we managed to pull out the gap a little bit more, which was good. We’ve been banging on the door the last couple of years, so to get it done at [Toyota’s] home race is obviously great.”

For his part, Alonso said he and his teammates were “unlucky” to have their early lead nullified, but also admitted he was having issues with the #8 car’s balance in his stint.

“We were 1m20s in front [of the #7 car] and the Ferrari had a tyre explosion and all that advantage was neutralised [by the safety car],” the Spaniard recalled.

“We took the right choice of tyres with wet tyres at the start, the sister car took another tyre and they had to stop.

“After [the race] was neutralised, we were not quick enough to battle [car #7], we were always missing a couple of tenths.

“[The balance] was not great. We were struggling with understeer in high-speed corners, and the last sector was not great, either. We didn’t have the speed we had other times.”

Despite losing out on victory at Fuji, Alonso, Buemi and Nakajima extended their points lead to 13 over Kobayashi, Lopez and Conway, helped by the #3 Rebellion failing to finish after Gustavo Menezes’ crash. 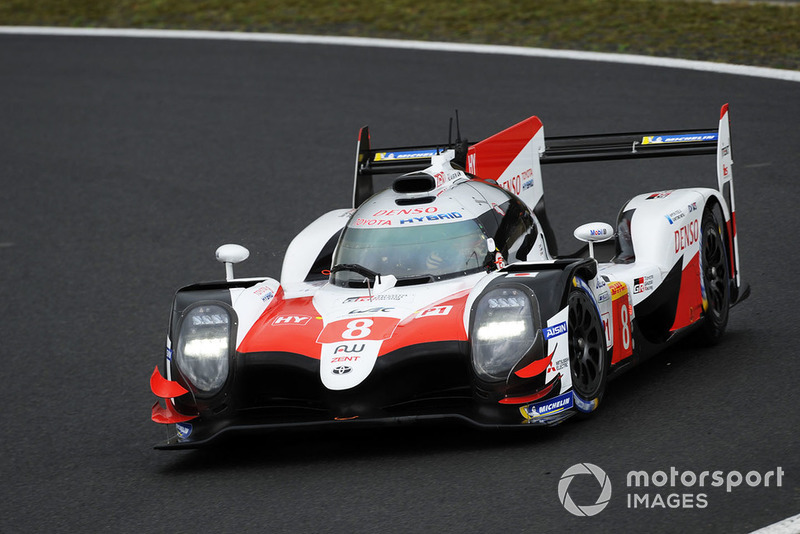