Survival Mode was the Order of the Day at Spa 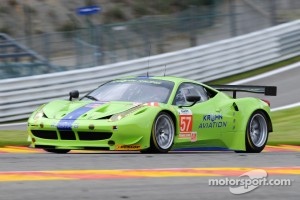 The Krohn Racing Team came to Spa this week with high hopes for a podium finish, maybe even a victory in the 6 Hours of Spa race. Those hopes were dashed as the cold and rainy Belgium weather played havoc on the tires and race set-up.

Tracy W. Krohn, Nic Jönsson and Michele Rugolo drove their Ferrari F458 to a seventh place finish in the GTE-Am class at the 6 Hours of Spa World Endurance Championship (WEC) race at Spa-Francorchamps circuit on Saturday, May 5.

The Krohn Team went into “survival mode”, seeking to drive as clean of a race as possible and collect valuable point towards the 2012 WEC GTE-Am class championship after two rounds in the 8-race WEC series.

Owner/driver Krohn started the race from the eighth and final class position and drove the first 65 minutes of the race before turning over the car to teammate Nic Jönsson. The Swede handed back the Prancing Horse to Krohn at 5:55 p.m. Rugolo finished the final stint and brought it home safely in seventh. Tires rotated throughout the race between wets at the start to intermediates and slicks during the changing conditions during the six hours of racing.

Once again, points were the important factor in their bid for the 2012 WEC LMGTE-Am Team Championship.

TRACY W. KROHN, Krohn Racing Team Owner/Driver, No. 57 Krohn Racing Ferrari F458 GTE-Am: Regarding the race start: “It was total blindness at the start. You couldn’t see anything. So I just hung back and waited and tried to get the tires as warm as I could. I never got any grip. When I did finally get a little bit of grip out of the tires, there was too much push and too much understeer in the front of the car. It was just not a very pleasant experience. The idea was just to keep it on the track. I managed to do that but it was a struggle to do that. This is the first time for these Dunlop tires with wet tires and the first time we’ve had a wet race in at least the last two seasons. We didn’t know what to expect from these tires. It’s very cold here so getting the set up on the car has been difficult all week.”

Regarding the on-track incident and finish: “Going into Turn 1 I saw him (car #49) in my right rear mirror and he was pretty far back. I was already committed to the turn. He just nailed me and used me for a brake. Apparently he locked his brakes up and hit me. It is what it is and we got back around (to the pits). The car was just very difficult to drive. We put intermediate tires on and the right rears went away pretty quick so it was loose the entire time. It was loose at low speed; it was loose at high speed. It was just a handful to drive so we did the best we could. We went into survival mode and that’s how we finished – in survival mode.”

NIC JONSSON, No. 57 Krohn Racing Ferrari F458 GTE-Am: Regarding his first stint: “As soon as I got in we put slicks on and I know since before this week that this cold weather the tire doesn’t really work real well. I had a humongous push and was really struggling. I just kind of tried to survive out there. People were driving by me on all sides and there was nothing I could do. If you start pushing more, you’d go off the track and that wouldn’t do any good. So we put a different set of tires on when I came in for my pit stop and it got a little bit better. The balance was a little better but it’s just, overall, very low grip. You can’t really do much…just trying to make it to the end. Hopefully we’ll have some luck with some others having trouble and score some valuable points this weekend.”

Regarding the race and finishing position: “I think that the Krohn crew guys did an exceptional job again today. They got the car back out there after a little incident. We came home with some valuable points. We were put into survival mode there when the weather was like it was and knowing the tire didn’t really work with those weather conditions. We just had to make sure we came home safe and score valuable points for the championship. Hopefully we are not going to have another race with these weather conditions so our tires should work better for us next time. We will go to Le Mans next with a lot of optimism for being competitive and hopefully be running up front there. Thanks again to the Krohn guys and let’s go to Le Mans.”

MICHELE RUGOLO, No. 57 Krohn Racing Ferrari F458 GTE-Am: “My target was to check if the car was pretty good and to bring the car home safely. I did both things. The car was very quick actually. There were some problems with the tires because we struggled all week with the temperatures on the tires and even in the race we didn’t find the right solution. But we think it was just a problem of the tire being too stiff. There was no solution for the weekend. The balance of the car was good. The car was, in my opinion, easy to drive, safe to drive and was quick. I liked it very much. We were also unlucky in the race because Tracy had a little crash with a prototype. The prototypes guys are like always, just not taking care of slower cars. It’s very difficult to manage a long race because you are always focused on the feeling of the car but also 50 percent watching the mirrors. This is not nice to drive like that. There should be a little bit more patience, especially in the fast corners where our car is not reactive like their cars. We cannot do the things they do. They have to think that we don’t have the same amount of downforce as they do. It’s ok though. I’m happy from a set-up point of view but disappointed 100 percent for the result because I think we could have done a different race.”

DAVID BROWN, Krohn Racing Team Manager/Race Engineer: “We are glad to have finally gotten to the end of the 6 Hours of Spa race and taken some points from a challenging, difficult, arduous and incident-filled afternoon. We have been struggling for performance all week and by running various combinations of tires on the car during the race, we were able to find some direction and some sense, which will help us for the rest of the year.”