Double podium offers some consolation for Larbre Competition at Sebring

Gearbox issues just 15 minutes from the finish robbed Larbre Competition of the perfect start to this year’s FIA World Endurance Championship at the 12 Hours of Sebring in Florida on Saturday where the team was forced to settle for a nevertheless impressive double GTE Am podium. 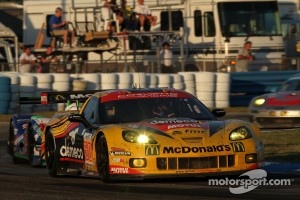 Despite the French team’s impressive roll call of sportscar racing honours, victory at the classic Florida event has consistently eluded the team. That long wait appeared to be over however after impressive and fault-free performances from Pedro Lamy, Patrick Bornhauser and Julien Canal saw the #50 Corvette C6.R’s crew remain on course for a winning start to their WEC campaign having controlled the race from the front for much of its duration.

Starting third in class following a deliberately cautious qualifying run, Lamy was quick to demonstrate the car’s true pace by dicing with the front-running Krohn Racing Ferrari and Team Felbermayr Proton Porsche before opening up a 20-second lead which both Bornhauser and Canal maintained.

With Lamy installed for the final time victory looked all-but assured as the former F1 driver set about establishing a 30-seconds advantage over the chasing pack before fate intervened.

Such was the rate of attrition at Sebring that its retirement with just eight laps remaining still saw the car classified third in class behind the #70 sister machine of Christophe Bouret, Pascal Gibon and Jean-Philippe Belloc.

The combination of speed and consistency, as well as shrewd strategy calls under full course cautions, had seen the trio battle back from two laps down following a radio mix-up in the early stages, which resulted in an unnecessary pit-stop.

While losing victory with just quarter of an hour remaining proved a bitter pill to swallow, Larbre Competition can at least take some consolation from their strong start to the World Endurance Championship ahead of round two at Spa-Francorchamps in Belgium on May 5.

Jack Leconte, Team Owner: “The race is not over until it is over and that was certainly the case last weekend at Sebring. We had prepared very well for this event with testing earlier in the week allowing us to fine-tune set-ups and learn more about new components, such as the Brembo brakes. The drivers were also in good shape following a winter of physical training in preparation for the World Championship.

“It was a breath-taking race at times between the top three so to go out with a broken differential so close to the finish was disappointing. However, we must take heart from the overall result and that of the #70 car. The team perfectly understands the particular American regulations and we were able to use that to our advantage. Indeed, during the FIA debrief on Sunday morning Larbre Competition was mentioned as one of the few teams not to have incurred a penalty over the 12 hour race, while most American teams committed errors! The WEC’s leading teams demonstrated an exemplary level of preparation and control, with the #70 car’s faultless display ensuring it lost no time at all while our rivals made mistakes or encountered problems.

“Once the cars have returned to our Val de Vienne premises from America, preparations for round two at Spa will begin. Brazilian driver Fernando Rees will replace Pedro Lamy in the #50 line-up for this race while the #70 crew remains unchanged. Our objective there will be to take top spot in the WEC standings before the Le Mans 24 Hours.”

Patrick Bornhauser, #50 Corvette C6.R: “This was our second year racing at Sebring, a circuit that is always amongst the most challenging for car and driver alike. 2012 was no exception! It was also a great personal pleasure to work with Pedro Lamy throughout a week in which the car showed no problems and had been clearly very well prepared. The only incident occurred with just 15 minutes of the race remaining when a broken gearbox dropped us from first to third. Of course, after such a great team effort, it was disappointing to miss out on victory at this famous circuit. We did not make contact with a single car during the race which, considering there were so many entries, was an incredible achievement! At least we still scored a lot of important points which was not the case there last year.”

Pedro Lamy, #50 Corvette C6.R: “I was very happy to rejoin Larbre Competition and Jack Leconte. Sebring was the first round of the WEC and, as everyone in the sport knows, it’s a place where conditions are extremely tough. Following the team’s hard work, it was great to have victory within our reach towards the end of the race. Unfortunately I was also very disappointed to have to retire with eight laps remaining after such a difficult 12 hours. I would like to thank Patrick and Julien for welcoming me, as well as for their performances.”

Julien Canal, #50 Corvette C6.R: “Testing at the beginning of the week went well, especially as we found a good set-up for the Sebring layout which is so specific. Teaming up with Pedro has allowed me to evaluate my driving performance and to achieve lap times very close to his! The car helped us remain in the top three and move into first position during the final hour of the race before the mechanical problem cost victory a few minutes from the end. We are disappointed but still at least scored points for finishing third which provides a good platform for the title race!”

Christophe Bourret, #70 Corvette C6.R: “This being my first time at Sebring and the opening round of the World Endurance Championship meant that we were a bit nervous. It was a fantastic week during which we mixed with the world’s top 50 endurance drivers. Having learnt the track and experienced dealing with others in prototypes and GTs, we decided to keep a low profile in the race. With so many twists and turns we knew that by just crossing the finish line we could score a really good result, and so it proved. Making the podium with second place feels magnificent! On a personal note, after tedious winter months physically training with 321 Perform, I was very pleased to see that I was fit in comparison to the other gentlemen drivers.”

Pascal Gibon, #70 Corvette C6.R: “It was with much humility and ambition that I arrived at Sebring with the hope of doing well alongside Christophe and Jean-Philippe. The opening WEC round provided a great challenge but to find ourselves in the middle of so many experienced drivers represents an extraordinary adventure and one that began with a second place finish. I must say a big thank you to such a passionate team with whom I expect to achieve further fantastic performances in the future. I cannot wait for the next round in Spa!”

Jean-Philippe Belloc, #70 Corvette C6.R: “For me, although Sebring is the second best endurance race in the world, it is on a par with Le Mans as the most difficult. It’s very hot and the circuit is extremely bumpy with the track surface offering little gip. With so many cars entered and only one straight on which to relax slightly, traffic management is totally crazy. It’s a case of surviving so, in that context, Christophe, Pascal and I can be very proud! It was our first race in the Corvette and we still have further progress to make. Together with the team we have laid a solid foundation for the 2012 WEC season, which I’m hopeful of building on at Spa. It can’t come soon enough!