After two consecutive wins in Asia at the Mount Fuji and Shanghai circuits, Larbre Competition was crowned LMGTE Am Trophy title winners for the inaugural FIA World Endurance Championship season.

This on-track performance was the culmination of a year’s domination by the Larbre-entered cars in endurance racing that included LMGTE Am class victory at the Le Mans 24 Hours. 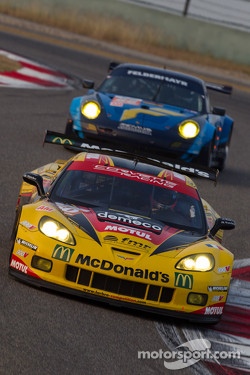 During the course of the 6 Hours of Interlagos in Brazil, an off-track excursion damaged the front of the #50 Larbre Corvette.

This led to discussions in post-race scrutineering after the ride height was found to be insufficient by the technical officials and the car was subsequently excluded from the results of the race by the Stewards of the Meeting.

Citing force majeure, an appeal was lodged with the FIA’s International Court of Appeal on September 18 by the FFSA (French Federation for Automobile Sport) on behalf of the entrant, Larbre Competition.

Discussions between the parties have revealed difficulties in the schedule for hearing the appeal.

Now that the world title has been secured by Larbre Competition, team manager Jack Leconte has decided, with the agreement of the FFSA and ACO, to withdraw the appeal.

Jack Leconte: “We wish to clear the decks to allow everyone to get on with preparing for the second season of the WEC in 2013 and so have decided to turn the page.”

The team is scheduled to visit Corvette Racing on December 1 and will then attend the meeting for teams competing in the WEC in Paris on December 1.

Larbre look forward to hearing the organiser’s detailed arrangements for the championship which will be presented to the team’s partners. After studying the proposals, Larbre Competition will finalise its plans to compete in either the WEC or ELMS.

Larbre Competition will announce its 2013 programme on January 1.