The new Merchant Services Racing team made an excellent showing at the 60th Anniversary Mobil 1 Twelve Hours of Sebring Fueled by Fresh from Florida in Sebring, Florida, March 14-17. As the first race of the ALMS and WEC seasons, Sebring marks not only the beginning of the 2012 season, but also a beginning for MS|Racing as a franchise. This season’s sponsors of the MS|Racing effort include One24.com, Merchant Services LTD, VP Fuel, Braille Battery, MBRP Exhaust, Lafarge, Sun Ski, Nasamax, Butterfield Farms, and Lamex. 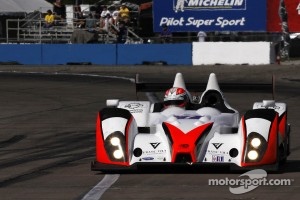 The No. 8 ORECA LMPC, driven by Kyle Marcelli, Lucas Downs, and Dean Sterling qualified well and was off to a great start. The car came into the pits with a dead spot in the steering rack. The car returned from the paddock shortly thereafter and re-joined the race with excellent lap times, only to make heavy contact with a recently-looped Ferrari, taking it out of the race permanently. No. 8 will be back for the next race in Long Beach, California, again with Marcelli in the driver’s seat.

“There was nothing that could be done”, said Sterling, once out of the car. “The Ferrari lost traction, spun, and was so close that contact was inevitable…it’s one of those things that happens in racing. We will be back and running even stronger at Long Beach!”

The No. 7 ORECA LMPC, driven by Chapman Ducote, Pablo Sanchez and Javier Echeverria had better luck, with Pablo posting the track’s LMPc-Class fastest lap in practice sessions. Qualifying 4th in-class by a hundredth-second window to the next car, the No. 7 car was poised for a serious run. The car and all three drivers performed well, posting highly competitive lap times on every stint and running in first position at several points in the race. Chapman, running the full stint in P3, brought the car in for a full driver change, handing off to Pablo Sanchez who immediately took the car, now on fresh rubber, back on track and worked from 3rd to 1st position with consistently fast lap times. With Chapman back in the car, a few laps into his stint, a baseball size piece of tire from another competitor’s car became lodged in a brake duct, causing overheating at the rotors, pad failure, and resultant failure of the brakes. Ducote managed to squeeze nearly a dozen competitive laps out of the racecar, even without brakes. Upon returning to the pits, Javier Echeverria belted in and took the car to the paddock where the issue was resolved within a few short minutes. Echeverria took the car back on track, running from 7th position to 4rd within a dozen laps with excellent driving.

“The crew were amazing”, said Ducote, “they changed the entire rotor/pad/caliper assembly and had us back on track in the span of just a few laps”.

Those few laps proved to be too much to overcome, with the 1st, 2nd, and 3rd place cars suffering no further issues. Merchant Services Racing took a well-earned 4th position at the checkered flag.

“It’s a good start”, said Brian Alder, Team Manager “We have great talent and a great team. Everyone in LMPC had better take heed: watch out for the boys of Merchant Services Racing!”

Fellow racer and a sponsored driver of Merchant Services LTD, Dion Von Moltke, had an absolutely stellar race, carrying his team to the finish line for the final two hours of the race and on to a 1st place podium in the GTC-Class Porsche of Alex Job Racing. This marks Dion’s first win at Sebring and a major milestone in his career. Dion will be seen all-season with Dr. Jim Norman and the APR-Sponsored Audi R8-GT.