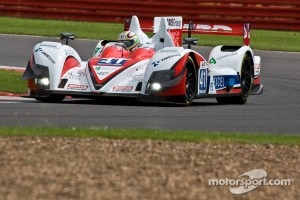 Greaves Motorsport scored a strong fourth place today at Interlagos, Brazil, in the fifth round of the 2012 FIA World Endurance Championship. Driving the team’s Nissan powered Zytek LM P2 prototype, Christian Zugel, Elton Julian and Championship débutant Roberto Gonzalez, had a near flawless race in the 6 Hours of Sao Paolo.

Elton Julian had a fast opening stint, avoiding the multiple incidents on the first lap to hand over a well placed car to Christian Zugel. He drove a double stint maintaining the progress. Christian handed over to Roberto Gonzalez who had a tough baptism in the FIA WEC, running a triple stint in difficult and changeable conditions. Elton completed the final two stints to bring the car fourth in LM P2 and eleventh the overall classification.

The result maintains Greaves Motorsports’ fourth position in the LM P2 Team Classification in the 2012 FIA World Endurance Championship. The next round of the Championship will be held in Bahrain on 29th September.

Christian Zugel: “To race at this famous track, home to the Brazilian Grand Prix, is fantastic. The local promoters have done a great job in getting the sportscar message across, so congratulations to them. I had a pretty good run during the race and in my second stint I felt that I was getting the best that I could out of the car. I would like say thank you to my co-drivers; Elton, who was his usual quick and safe self, a true professional. A big thank you also to Roberto, who at short notice covered for his brother and drove faultlessly and at pace. What more could you ask? And not least a big thank you to the team, we drivers really appreciate the hard work that is put into preparing the car. The reward? Fourth place and still in the Championship fight, awesome.”

Elton Julian: “Racing in South America and at Interlagos is special, the atmosphere is unique. The race was as tough as we expected but I had a good first stint and then on the final stint we had an outside chance of a podium. I pushed like crazy but the gap was just too great. My team mates both did a fantastic job, I would like to pay a special tribute to Roberto, our Super Sub! Thanks also to the team, their hard work produced a great car and fourth place was a just reward. We are still in the title chase and will keep up the fight, roll on Bahrain.”

Roberto Gonzalez: “It was my first race for the team and it was fantastic. I had a triple stint during the mid part of the race. The traffic and changing conditions made that really tough but the team gave us a great car. My job was really simple, keep up the pace and bring the car back for Elton in one piece, I think I managed that. I would like to thank Christian and Elton for being perfect team mates and the team for giving us the best car. I would also like to thank Ricardo for giving me this opportunity, true brotherly love.”

Car owner Mme. Renate Ojjeh: “I was extremely pleased with the performance of the team and fourth position was a great result. The team continues to display a high standard of preparation and race craft. The 6 Hours of Sao Paolo was a special event, especially nice for me renewing my old friendship with Emerson Fittipaldi. I got to meet his family and we reminded each other of when Karim, my son and his son, Jason, went racing as children in a “soap box derby”, such a long time ago.”

Team Manager, Jacob Greaves: “We came to Brazil with a plan in mind, to maximise our Championship standing and we leave with that objective satisfied. Christian, Roberto and Elton drove perfectly and the team matched their performances, as did our partners, Nissan, Zytek and Dunlop. This is a team sport and we succeed only by acting as one. Our opponents helped in our task, one receiving two late penalties for speeding in the pit lane, so we nearly repeated our Spa podium finish. The event was a great success, a classic endurance race and congratulations are due to the local promoters. We are looking forward to continuing the title fight in Bahrain.”