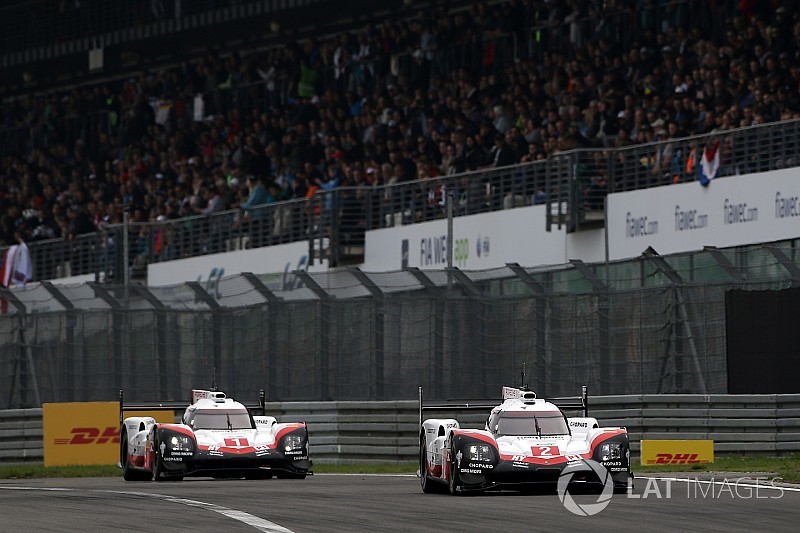 Bernhard and his teammates triumphed in a close-fought battle with the sister Porsche 919 Hybrid driven by Andre Lotterer, Neel Jani and Nick Tandy during which the two cars were rarely separated by more than 10 seconds.

The two Porsches, racing in high-downforce configuration for the first time this season, swapped positions multiple times over the course of the six hours.

Lotterer appeared to have secured the victory over the final hour, pulling a 12s gap on Bernhard until the two cars made splash-and-dash fuel stops in the final 10 minutes.

Bernhard was stationery for 20s less in the championship-leading Porsche, which allowed it to take the victory in what was clearly an orchestrated move.

Toyota briefly took the fight to Porsche with the pole-winning #7 TS050 Hybrid, with Kamui Kobayashi leading to the first round of pitstops before handing over to Jose Maria Lopez.

The Argentinian driver was quickly passed by Hartley and then Jani, but remained in touch until the second fuel stops.

Lopez was unable to match the Porsches on his second stint on the tyres and dropped 20s before handing over the car to Mike Conway, with the #7 trio ending up more than a minute down at the flag.

Sebastien Buemi, Anthony Davidson and Kazuki Nakajima, winners of the opening two rounds of the WEC, finished a distant fourth after losing five laps right at the start of the race.

Fuel pump failure meant Buemi had to complete the formation lap on electric power before pitting for a replacement.

Jarvis battled with Bruno Senna in the best of the Rebellion Orecas, but the Le Mans-winning #38 car took control of the race in the second hour.

Senna, Julien Canal and Filipe Albuqueque ended up a lap down at the finish in the #31 Rebellion.

The Signatech Alpine team pipped the second Rebellion team to the final spot on the class podium.

Its #36 Alpine shared by Nicolas Lapierre, Gustavo Menezes and Matt Rao sealed the spot ahead of the #13 Oreca of Mathias Beche, David Heinemeier Hansson and Pipo Derani during the final hour.

Calado established the #51 AF Corse Ferrari 488 GTE in the lead during the fourth hour and went on to claim the victory by 50s.

Frederic Makowiecki and Richard Lietz took second in their factory Porsche 911 RSR by just 8.7s from the sister car shared by Michael Christensen and Kevin Estre.

The best of the Aston Martins, the #95 car shared by Nicki Thiim and Marco Sorensen, took fourth, ahead of Ford's best finisher, the #67 of Harry Tincknell and Andy Priaulx.

GTE Am honours went to the Dempsey-Proton Porsche driven by Matteo Cairoli, Christian Ried and Marvin Dienst, less than five seconds clear of the #54 Spirit of Race Ferrari 488.

Toyota says Porsche the favourite to win at Nurburgring