OAK Racing with G-Drive Racing in the 2014 championship

Following the official publication of the list of entries for the 2014 FIA World Endurance Championship and the Le Mans 24 Hours, OAK Racing confirms that it will run a car for G-Drive Racing.

The results of the French team in 2013 helped it to achieve recognition among the players in the world of endurance, and it’s been chosen to run the G-Drive Racing entry. The after, which has entered LM P2 prototypes over the past two seasons, has asked OAK acting to run a Morgan Nissan LM P2 shod with Dunlop tyres and the French squad will put all its expertise and knowhow at the disposal of G-Drive Racing.

The no.26 prototype entered by G-Drive Racing has a topclass driver lineup. The Russian team is continuing to put its trust in its fellow countryman, Roman Rusinov , who already drove for the squad in the 2012 and 2013 world championships, and scored no fewer than four victories last season. 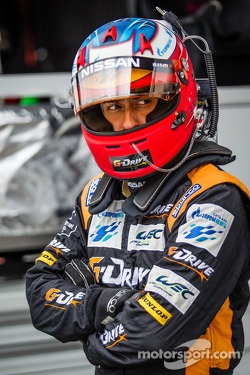 He will share no.26 with two Frenchmen, Olivier Pla and Julien Canal. Pla , who came second in the 2013 Le Mans 24 Hours and in the world championship in LM P2, has accumulated considerable experience in the car and has been working with the technical team whom he knows well for a long time. Canal, the silver driver in the lineup, is a newcomer to LM P2 after racking up topclass results in GT, in particular three category victories in the Le Mans 24 Hours!

The no.26 GDrive Racing prototype will race in the legendary Le Mans 24 Hours in June, an event that counts for the FIA World Endurance Championship. On that occasion it will share its garage and its G-Drive colours with the no.35 MorganNissan LM P2 entered by OAK Racing, which has an invitation thanks to its victory at Le Mans in 2013.

Jacques Nicolet, OAK Racing and Onroak Automotive President: “We’re very happy that the results scored by OAK Racing have convinced G-Drive Racing to choose us to run their car. Although our technical team will be working in new colours their motivation remains intact. In addition, it’s a twofold satisfaction as G-Drive has decided to enter an Onroak Automotive chassis. Thus, we’re going to work with GDrive Racing both as a constructor and a race team"

Roman Rusinov: “I’m looking at the way events are evolving with op:mism. We began the year early on in dynamic fashion, and during “the Rolex 24 at Daytona” Olivier and I worked together very well. Now we are getting ready for a new season in the FIA Endurance World Championship. I set the highest goals and think that we can fight for the Champion’s title. For sure, at the beginning of the new season we have to start from scratch, as during the winter our rivals were able to prepare themselves and it is very hard to predict the alignment of forces. New drivers, designers and engineers have joined the Championship. So, the show promises to be interes:ng! We’ll have the preseason tests soon, and it will help us to understand the total picture more clearly. Chances of winning... We have everything for this: a strong team of drivers, the fastest car and the will to win!"

Olivier Pla: “I’m delighted to be sharing this season with my new teammates Roman Rusinov and Julian Canal. I think the three of us make a pretty strong driver lineup. I know the car and the team very well and both have proved that they have adapted well in testing and in the Daytona 24 Hours with Roman. The aim is clear – give all we’ve got to win the title with G-Drive Racing!”

Julien Canal: “After four years at the top level in GT AM with the WEC title and three victories in the Le Mans 24 Hours I really wanted to explore another path. I did a lot of thinking during the winter. Looking at OAK Racing’s fantastic year in 2013, their professionalism and their involvement, and the great relationship I have with the whole team, the offer to drive for G-Drive Racing with the technical backup of OAK Racing is a new, extremely motivating challenge for me. I’m more determined to take it up as a silver driver as I’m also a company boss. I’ll do the maximum to help G-Drive Racing onto the topmost step of the podium!"