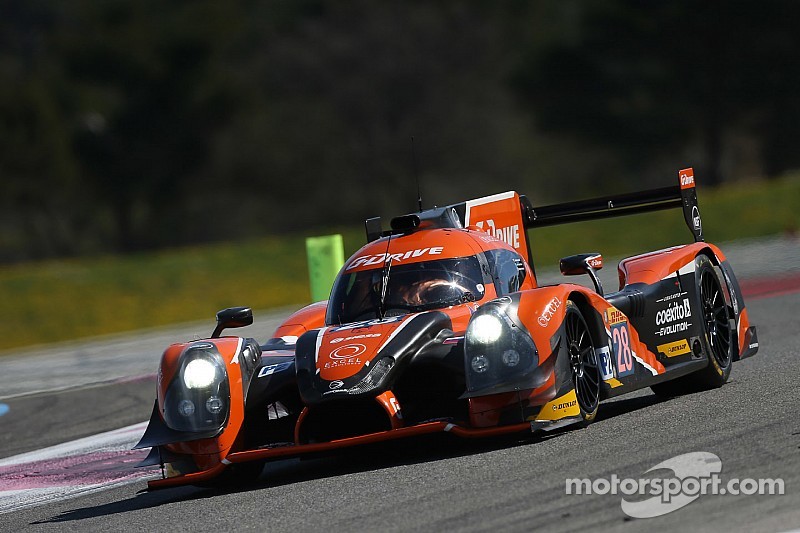 Onroak Automotive represents half of the LM P2 field.

On the 27th and 28th of March, the Castellet circuit welcomed the Prologue, the two official test days which mark the start of the FIA World Endurance Championship.

The presence of the Le Mans manufacturer will be reinforced from the 6 Hours of Spa-Francorchamps by the American team Extreme Speed Motorsport, that recently ordered two Ligier JS P2 chassis, which will replace their current HPD ARX 03B, and which will still be equipped with the Honda HPD engine.

The tests run over these two days don’t pose a sporting challenge, but they are the competitors’ first confrontation. The teams’ priorities are not to search for a perfect performance. It’s more of a ‘general rehearsal’, with a minimum of fifty obligatory laps per car. Despite a first day where few of the LM P2 cars went out on track for long because of very strong winds, and sessions where the teams were very prudent and concerned with economising their engine running time, this Prologue confirms that the first round at Silverstone on the 11th and 12th of April will be competitive.

Running to dispute the victory

With a Morgan LM P2 EVO-Sard from Team Sard Morand fastest in the second session on Friday, and a Ligier JS P2-Nissan from G-Drive Racing leading the two sessions on Saturday, Onroak Automotive confirms that both chassis will be in the running to dispute the victory.

Team Sard Morand, which made its official presentation on Friday evening in front of the press, made the most of these two Prologue days to finalise a few adjustments.

Christian Klien-Koki Zaga-Zoel Amberg, the line-up of the #39, and Pierre Ragues-Oliver Webb-Tristan Vautier, in the #43, have confirmed that the evolutions brought to the Morgan LM P2 chassis over the winter will allow them to fight for the victory.

The goals of G-Drive Racing were similar: testing the last adjustments to the Ligier JS P2-Nissan #26 and #28, respectively entrusted to the line-ups of Roman Rusinov-Julien Canal-Sam Bird and Gustavo Yacaman-Pipo Derani-Ricardo Gonzalez, before the Silverstone meeting

After having had various technical problems that immobilised it in its box for a good part of Friday, the #35 Ligier JS P2-Nissan then followed up with its laps without a hitch. The team of gentlemen drivers, Erik Maris, Jean-Marc Merlin and Jacques Nicolet, managed to continue getting to grips with their new car. For them, looking for enjoyment is equal to looking for performance!