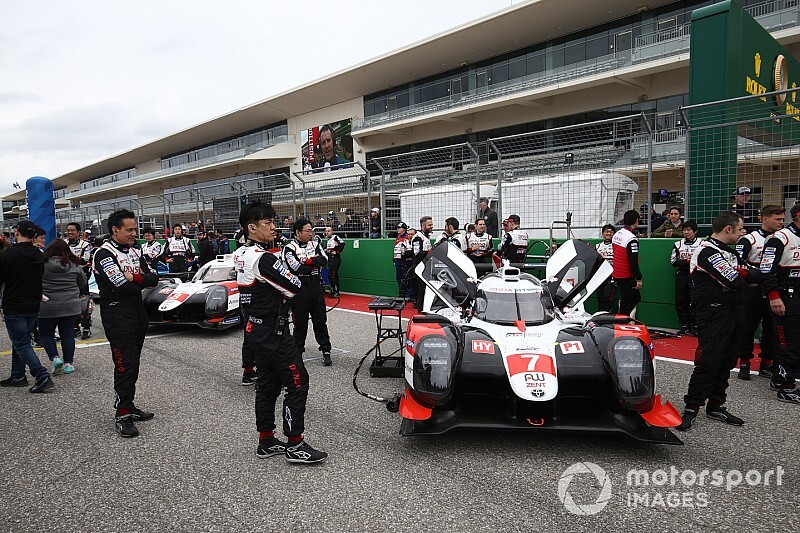 The FIA World Endurance Championship hasn’t exactly produced too many classic races since Toyota was left as the only manufacturer in LMP1, but last weekend’s Lone Star Le Mans was by far the least eventful this writer can recall.

Given Ginetta’s absence from the COTA race, reducing the LMP1 car count to just a Rebellion and a pair of Toyotas, the chances of a thriller weren’t high from the outset. That said, you only need two cars to make a race, or so the old adage goes. It helps though when one of them isn’t castrated by a convoluted system of success handicaps.

Even if the 2018/19 superseason – characterised by endless bickering over Equivalence of Technology rules designed to at least give the privateers a grain of hope against the all-conquering TS050 Hybrids – will not be remembered fondly by sportscar racing fans, it did at least produce some good battles between the Japanese marque’s two cars.

That hasn’t been the case since the 2019/20 season-opener at Silverstone, the race before the much-vaunted handicap system took effect. And in Austin, the sheer gulf in performance between the two Toyotas was at its most jarring yet.

Throw in the Rebellion’s massive advantage and a track with enough tarmac run-off to make caution periods unlikely, and all the ingredients were in place for an utter procession.

On paper, the seven-point advantage for the #7 Toyota crew pre-race translated into a handicap of around half a second a lap relative to the sister #8 car. But, as Mike Conway explained, the nature of the track and the exact penalties applied, relating largely to fuel allocation and boost usage, meant the real deficit was around nine-tenths.

That grew further when traffic became a factor, as the #7 car couldn’t use the boost to clear slower cars like the #8 was able to – hence the massive two-lap difference come the finish.

Although the #8 car kept the Rebellion vaguely honest, with no full-course yellows or safety cars all race to throw in some strategic variables, there was nothing that Sebastien Buemi, Kazuki Nakajima and Brendon Hartley could do to surmount Rebellion’s pace advantage.

Toyota technical director Pascal Vasselon may have claimed afterwards that the #8 crew had a fighting chance, but it’s hard to escape the feeling that the Frenchman was simply trying to deflect criticism from a system he played a vital role in creating.

The inescapable reality is that success handicaps have turned what was already a fragile LMP1 competition into something that can’t even be termed a sporting contest.

Some of the details of the handicap system are well worth criticising: the size of the co-efficient, which is much larger than originally envisaged; the nonsensical ‘virtual car’ rule that was never properly explained until it came into effect; the fact it penalises individual crews for success instead of attempting to equalise different types of car.

But the biggest problem of all is that the rule’s intention from the outset was ill-considered.

It simply aimed at making it impossible for Toyota to win every race, as it had done in 2018/19 (on the road at least). No thought was ostensibly given to whether individual races would retain any competitive element.

If the goal was to allow Rebellion to nick a couple of wins off Toyota, and keep the Swiss team in the championship hunt, at least mathematically if not in reality, the architects of the handicaps have got what they wanted.

But they won’t have failed to realise that no race since the Silverstone opener has featured anything approaching a meaningful fight for the win (although it ought to be noted that Bahrain could have without Charlie Robertson’s Ginetta piling into the side of Bruno Senna’s Rebellion at Turn 2).

Sebring is likely to be little better on that front, as the two Toyotas will still be split by just under half a second a lap around the 6.019-km Florida airfield track as a result of the five-point gap between the cars in the standings. Car #7 will again stand no chance.

The Rebellion, meanwhile, will still in theory be 1.5s per lap up on the quicker of the Toyotas, although it remains to be seen if the Toyota’s traditional advantage on Sebring’s notoriously bumpy surface will be enough to counter that.

Clearly, the malaise at the top level of endurance racing runs deeper than the misguided measures that were taken to try and make the 2019/20 season more than just a Toyota benefit. But that’s not to say that nothing should be done and that fans should simply learn to accept COTA-style snorefests indefinitely.

The previous system of the FIA and ACO tweaking the EoT for every race was far from perfect, but it was better than what we have now. Besides, the rulemakers have accumulated plenty of data regarding how the various LMP1 cars perform carrying different handicaps, so they should be able to have a stab at making an EoT that allows all three cars in the class to have at least a chance of coming out on top.

Even if they don’t quite get the numbers right, we would at least still have a proper competition between the two Toyotas, and something approaching a fair contest for the remaining two ‘regular’ rounds of the season ahead of the Le Mans 24 Hours title-decider.

Given the poor state of LMP1, it could be argued that trying something as radical as success handicaps was worth it. But the novelty of seeing cars other than Toyota being in a position to challenge for victory, its only conceivable benefit, has long since faded.

It’s crystal clear that, at least as they are currently designed, handicaps are spoiling the WEC. They have to go before they inflict any more damage on the series.