ORECA 03 teams finish season on a high note in Shanghai

ADR-Delta finishes season with second consecutive win ! Two weeks after their success at Fuji, ADR-Delta won the final race of the FIA World Endurance Championship in the ORECA 03 driven Graves/Martin/Beche. 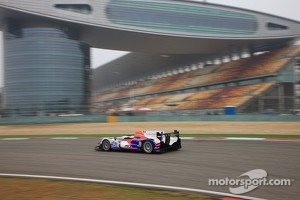 What an end to the season for the ORECA 03, winning the last three rounds of the FIA World Endurance Championship ! After Pecom Racing’s success at Bahrain, and two weeks later with their victory in Japan, ADR-Delta garnered another prestigious win in China. Four time winners in this year’s FIA-WEC (Spa, Silverstone, Fuji et Shanghai), ADR-Delta finishes the year second in the LMP2 Trophy. Finishing the final race in fourth place, Pecom Racing also ended the season in the top three in class, while the two Signatech-Nissan cars come home in 5th and 7th positions in the last race. ADR-Delta, the winningest team in 2012 !

Again in pole position after qualifying, ADR-Delta had a careful start before regaining the top place. The trio of drivers in the No. 25 ORECA 03, composed of Tor Graves, John Martin and Mathias Beche, made their way back to second place, only a few seconds off of first and reached the top spot just before the half-way point. From there, the team never looked back, despite contact with a GT in the rear cover area. At the finish, ADR-Delta took the checkered flag more than 30 seconds ahead of second place and with the fastest lap of the race to their credit. With four wins in the LMP2 class in FIA World Endurance Championship, ADR-Delta is the winningest team of the season.

« For its first year in this discipline, the team did an awesome job » explains John Martin, one of ADR-Delta’s regular drivers. « We encountered a few issues in Sao Paolo and Bahrain, and without those we could have probably pushed for the title against Starworks. The car was fast and this season was really good, one of my best. Finishing second in the LMP2 Trophy is a good result : it was our aim for this race. We had our strategy and we kept it in place from start to finish. »

Starting in fifth place, Pecom Racing gained a position in the first hour before running in the top three until the last two-thirds of the race. Fighting for a podium finish right up until the last hour, Luis Perez Companc, Pierre Kaffer and Nicolas Minassian crossed the finish line in fourth place. Enough to ensure third place in the LMP2 Trophy.

{{1482140|right|s3} Signatech-Nissan was also in the battle for a podium finish, temporarily occupying third place with the No. 26 ORECA 03, driven by Nelson Panciatici, Pierre Ragues and Roman Rusinov. After changing the brake discs, the trio came home seventh. The sister car, the No. 23 driven by Franck Mailleux, Olivier Lombard and Jordan Tresson, finished in the top five after a consistent performance throughout the race. Signatech-Nissan end the season sixth in the LMP2 Trophy. « A great result for ORECA Technology»

« We couldn’t dream of a better end of season» admits Hugues de Chaunac, president of Groupe ORECA. « The ORECA 03 won the final three FIA-WEC races and that’s the best proof of the competitiveness in this car built by our own design team. Of course, none of this would have been possible without the teams that entered the car. I’m very proud of the performances which these teams realised throughout the year. With Thiriet by TDS Racing’s championship in ELMS, ADR-Delta and Pecom Racing’s wins, and Signatech-Nissan’s podium finishes, these are great rewards for ORECA-Technology, as well as the second and third place finishes in the LMP2 Trophy. We made big efforts to help the teams with our customer racing program and this only motivates us more for 2013! »

Tréluyer: His final laps at Shanghai before celebrating the championship