The ADR-Delta and Murphy Prototypes ORECA entries on the podium! ! 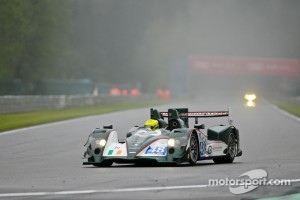 Longtime leaders, the ADR-Team finishes only six seconds off the win in LMP2. Murphy Prototypes reaches the third step of the podium.

The ORECA 03 teams consistently ran at the front during the 6 Hours of Spa, second round of the FIA World Endurance Championship. Leaders at the beginning, Pecom Racing was unable to solidify their good performance. But ADR-Delta, pole winners the day before, brilliantly took the relay. Regularly in the lead, the British team was in the lead with five minutes to go! John Martin, Robbie Kerr and Tor Graves just missed out on victory by six seconds after a final pitstop for fuel. The three men finish first among World Endurance Championship contenders. Proof of the ORECA 03's competitiveness against a field of 17 LMP2 cars racing in the Ardennes.

Regular entrants in the European Le Mans Series, Murphy Prototypes showed well on the international stage. Jody Firth, Warren Hughes and Brendon Hartley reach the third step of the podium, 40 secondes behind the leaders despite a stop and go penalty. This good result is complemented by Boutsen Ginion Racing's fifth place finish. The other ORECA 03 entries also had the potential to finish in the top five but racing incidents decided otherwise.

Fifth at the 12 Hours of Sebring ADR-Delta came close to winning the 6 Hours of Spa, 12 months after the ORECA 03's first success at this very track. The British team, who were making only their second endurance appearance spend much time at the front during an action-packed race. The team is still satisfied. "It's a fantastic result" said Tor Graves, who was joined by John Martin and Robbie Kerr. "We haven't had a lot of testing since the start of the season and if you consider the amount of work the team has put in, we had an excellent performance today. We showed what we are capable of. Although I'm a bit disappointed to have come so close to victory, but this podium is already great. The guys did a fantastic job and this result is interesting going to Le Mans.”

Eleventh at the start and 14th at the end of the first lap after a spin, Murphy Prototypes had an excellent comeback. Gaining position after position, despite a stop and go, Jody Firth, Warren Hughes and Brendon Hartley finished in third place. "I'm pleased with the result" said Jody Firth. "We could have aimed for the win without that penalty but the team did a good job. The ORECA was competitive. It progressed well from the practice sessions to the race. It's a positive thing to be on the podium against competitors from the World Endurance Championship."

Present with two ORECA 03 chassis, Signatech-Nissan Team's race was not a success. After suffering a flat tyre in the first lap, the Tresson/Mailleux/Lombard squad retired after an incident in the fifth hour. As for the other entry, the No. 26 driven by Panciatici/Ragues/Rusinov, it lost a wheel in the third hour. After leading the race, Pecom Racing had several incidents. Race Performance, who came to Belgium to prepare for Le Mans with drivers Frey/Hirschi/Meichtry were forced to retire after a mechanical problem. At home, Boutsen Ginion Racing finished inan excellent fifth place after a trouble free race from Jack Clarke, Bastien Brière and Jens Petersen. 5 May 2012Race action…

Starting under the rain, John Martin (ADR-Delta) gives up the LMP2 lead in the first lap but regains it after the first quarter hour. As for Soheil Ayari (Pecom Racing), sixth at the start, he fights for second place with the Morgans until the first round of pitstops. Thanks to a quick stop, the ORECA 03 of Pecom Racing takes the lead. Still at the controls, Ayari extends the gap on a drying track while John Martin maintains third place. Murphy Prototypes is hit with a stop and go at the 1:30 mark while in 7th place. Boutsen Ginion Racing continues their error free run while Race Performance suffers a fuel pressure issue.

Pecom is solidly in the lead as the second round of stops begin. Shortly after, the No. 49 spins and loses it's front cover after contact with a GT two hours in. The Argentine team stops for six minutes to make repairs. ADR-Delta inherits the leads but it too is slowed. The British team changes the bodywork after contact with a GT in the third hour. As the halfway point is reached there are four ORECA 03 in the top six. Now second the ADR-Delta entry tries to catch the No. 38 Zytek. Murphy Prototypes continues it's comeback up to fourth as Boutsen Ginion Racing follows and the No. 23 SignatechNissan in sixth. The race is neutralized twice in the second hour and the running order stabilizes.

While the Signatech-Nissan passes through the pits after an incidents 90 minutes yo the end, ADR-Delta continued the fight for the lead. 50 minutes to the end and Robbie Kerr takes the lead but must resist the charging Zytek on new tyres. Brendon Hartley is in third with only thirty minutes to go! The ADR-Delta holds position but with less than five minutes to go, the No. 25 ORECA 03 comes in for a splash and go finishing only six seconds off the lead with Murphy Prototypes coming home third, 40 seconds off the leader.