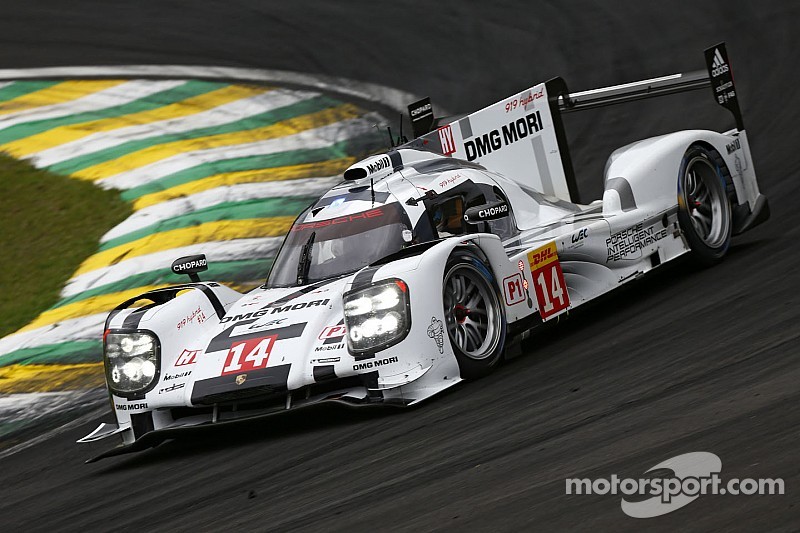 Cloudy and dry conditions welcomed the 26-car field for Free Practice 3 at Interlagos this morning in the final race weekend of the 2014 FIA World Endurance Championship.

It was a clean and trouble-free hour long session which saw the teams perfecting their qualifying set-ups before the crucial 25-minute session later this afternoon. Track temperatures peaked at 24.2 degrees and the air temperature at 21.4.

Porsche again enjoyed a 1-2 position at the top of the timing screens as Neel Jani set a scorching pace in the #14 Porsche 919 Hybrid. The Swiss ace set a 1m17.572s lap to smash the existing quickest lap at Interlagos.

The #20 Porsche driven by Mark Webber chipped away at Jani’s time and came within 0.376s. Porsche enjoyed a 0.5s buffer to the #8 Toyota Racing TS 040 of Sebastien Buemi who set his best time of 1m18.427 right at the end of the session.

Aston Martin Racing continued where they left off in FP2 yesterday with Stefan Mucke setting a best time of 1m30.027s to claim P1 in the #97 Aston Martin Vanatge V8. The German set his time halfway through the session to usurp the two Porsche Team Manthey 911 RSR cars.

In the LMGTE Am class Aston Martin Racing again led the way with the #95 entered car driven by Nicki Thiim peaking with a best time of 1m30.195s to hold a clear lead of their rivals.

Rebellion Racing was 1-2 in the LMP1-L class once again with the #12 Rebellion R-One Toyota heading the #13 machine. Lotus continued to show much promise and finished within a second of the #12 car in this session.

Once again the G-Drive Racing Ligier-Nissan held a significant advantage in the LMP2 class as they continue to push in their quest for the titles in Brazil this weekend. Roman Rusinov set the time of 1m24.241s to underline their billing as hot favourites.